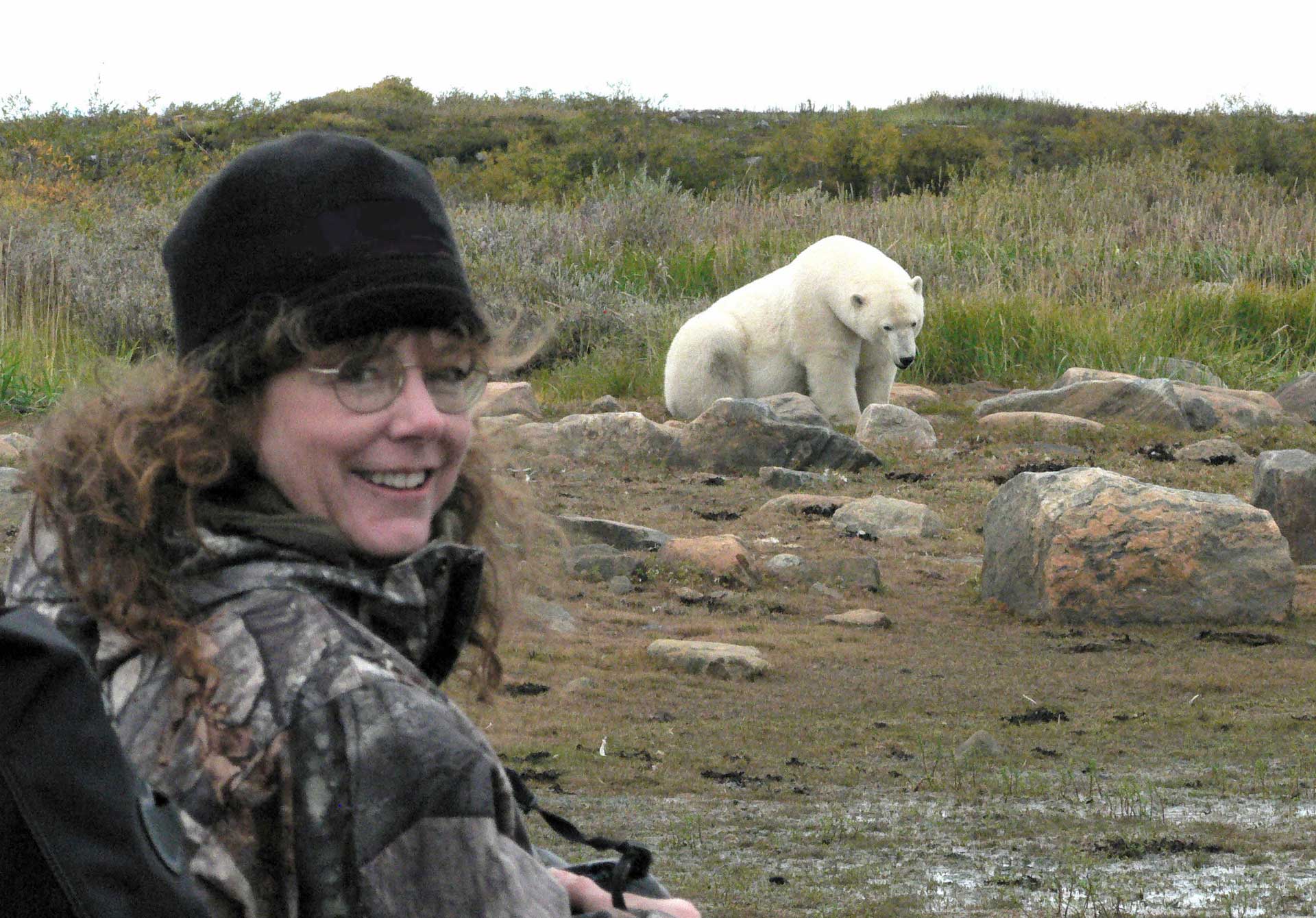 Wildlife artist and longtime Churchill Wild guest Linda Besse is living proof that you can excel at anything if you put your heart and soul into it.

The 61-year-old from Washington State had barely picked up a brush until she was in her early 40s, and she has now won numerous awards, the latest for her painting entitled Ice Bear, which was inspired by polar bears she met at Seal River Heritage Lodge.

Linda Besse meets a polar bear during one of her early trips to Seal River.

Ice Bear is also a finalist in the 15th Annual Art Renewal Center Salon Competition and was one of only six of 1,129 works submitted for the 2019 Oil Painters of America Fall Showcase to receive an Award (Honorable Mention.) We first met Linda and her husband Jim in 2006 when they arrived at Seal River Heritage Lodge for the Birds, Bears and Belugas safari. Linda was still early in the process of becoming a wildlife artist at the time, and the following year, while on a fishing trip at North Knife Lake Lodge, she intimated that she still had a long way to go, describing the various levels of wildlife painters and where she stood in the mix.

“I actually started fairly late in life,” said Linda. “Most of my contemporaries have been painting since they were kids. Jim and I were on a trip to Hawaii and I saw a guy painting outside and I thought that looked like fun, so I came home, went to the art supplies store, bought what I needed and just got started. My first paintings weren’t very good.” On the Ice. Original oil painting by Linda Besse. Inspired by a bear who came right up to the front door of Seal River Heritage Lodge.

Twenty years and 853 paintings later, Linda’s works have made appearances alongside those created by some of the best wildlife artists in the world. She now creates between 30 to 40 paintings a year along with one or two prints. Her original oil paintings range in price from $500 for smaller works to more than $20,000 for pieces as large as three by five feet.

Linda uses all her own references for her paintings, gathered from photos and memories made on adventures to all seven continents and 45 countries. On one of her adventures she paddled a canoe 459 miles from Gates of the Arctic National Park to Kotzebue, Alaska with five other artists, unguided, not resupplied, just so she could see muskox in the wild. Feast. Original oil painting by Linda Besse. When the King of the Beasts feeds, it is a feast for many.

“I probably have more than 200,000 reference photos now,” said Linda. “For Ice Bear I started with polar bear photos I took at Seal River. To turn the painting in to a winter scene, I used some of the ice that I saw in Antarctica and I made it into north polar ice, more like the sea ice you have up there. I used three different polar bears for Ice Bear, and then I made the coat a little thicker for winter. The inspiration was the bears from Seal River, but the polar bears we saw at Dymond Lake also helped.” Linda said that painting is a dynamic way to make a living, but the creative process takes time, and there can be some heavy lifting involved if you want to show your work in the right places.

“You have to figure out the composition and get it right,” she said. “For instance, yesterday I started on a piece, and when I finished the sky, I was so happy with it. Then I stood back and looked at it and thought, ‘the sky is all wrong.’ So, I came in this morning and scraped off the entire sky and started all over again. You have days like that. And sometimes when doing shows, you’re packing and prepping up to 1,800 pounds of material, which includes our booth. It takes three days to set it all up and then you have four days of showing.” Linda usually ventures out from the couple’s acreage in Mead, Washington for three or so shows each year, but so far in 2021 two of her planned shows have been postponed. Instead, she’ll be enjoying most of her time painting at home in the foothills of the Selkirk Mountains, accompanied by her husband of 37 years, Ruffed Grouse, coyotes, wild turkeys, and the occasional moose, black bear and mountain lion.

Both Linda and her husband have master’s degrees in geology, which naturally leant itself to an outdoor lifestyle. Jim specialized in mineral exploration while Linda’s speciality was geochemistry.

“I can paint really good rocks,” she said with a smile.

More seriously, the couple’s related academic degrees made adventure travel a perfect fit for both, and they have countless wild memories to call upon when looking for inspiration, especially in Linda’s case. Call of the Wild. Original oil painting by Linda Besse that resulted in her being named the 2017 Rocky Mountain Elk Foundation Artist of the Year.

The couple have been to the Churchill Wild lodges on numerous occasions since that first Birds, Bears and Belugas trip 15 years ago, and a number of their favourite memories are a result of those visits.

“A lot of it was going from Dymond Lake with Doug Webber (father of Churchill Wild co-founder and owner Jeanne Reimer) when he had things to drop off at your other lodges up there,” said Linda. “We’ve become good friends with Doug and Helen (Doug’s wife), and many times it was just quick trips like that. We’ve been to all four lodges (Seal River Heritage Lodge, Nanuk Polar Bear Lodge, Dymond Lake Ecolodge and North Knife Lake Wilderness Lodge), and it would be really tough to pick a favourite. Each has its own special nuances.”

They do have a few fond memories that stand out from the others however, two created at Seal River and the other at Nanuk Polar Bear Lodge. “It was our first time at Seal River Heritage Lodge,” said Linda. “It was midnight, we were up in the viewing tower, and there was a Fata Morgana. You could see the lights of Churchill reflected up into the sky. When you have a really clear sky, the lights get reflected back up. Even though Churchill is below the horizon, we could see its blinking lights. Many people think that phenomenon is how the Vikings might have first seen the land and snow of Iceland.

“At the same time as the Fata Morgana, and this is what made it totally unbelievable, you could see the setting sun in the other direction, and there were northern lights overhead. All at the same time! And the next morning Mike (Reimer) was banging on our door, and there was a polar bear right outside the lodge. So we also got photos of the polar bear first thing in the morning. All within a six-hour span, it was like ‘Wow!’ This is just unbelievable!’ “At Seal River Heritage Lodge the knowledge of the polar bear experts is overwhelming! One afternoon, one of the guides took Jim and me  out to see two polar bears who had been feasting on a beluga whale. (See second photo from the top, of Linda with the polar bear). We spent six hours with them observing their natural behavior while our guide filled us in with everything you would want to know about the bears. It was that experience that helped me over the years to add authenticity to my polar bear paintings.”

The memory from Nanuk Polar Bear Lodge was also the kind that guests never forget.

“We had arrived late at Nanuk and we were debating at 3:45 p.m. whether it was worth it to head into the field before dinner,” said Linda. “After deciding that any field time was ‘worth it’, the guide, my husband and I headed out. Little did we know that this short trip would be one of my favorite wildlife encounters ever. Sitting in a willow blind (a few sticks and brush covering our location), hundreds of snow geese nearby lifted off to great fanfare. Just then a pack of wolves passed by us (one stopping within 30 feet of me) before moving on.

“Sharing extraordinary moments like this with the person you love, in such a remote wilderness, is not only intoxicatingly romantic, it’s something we will cherish forever.”