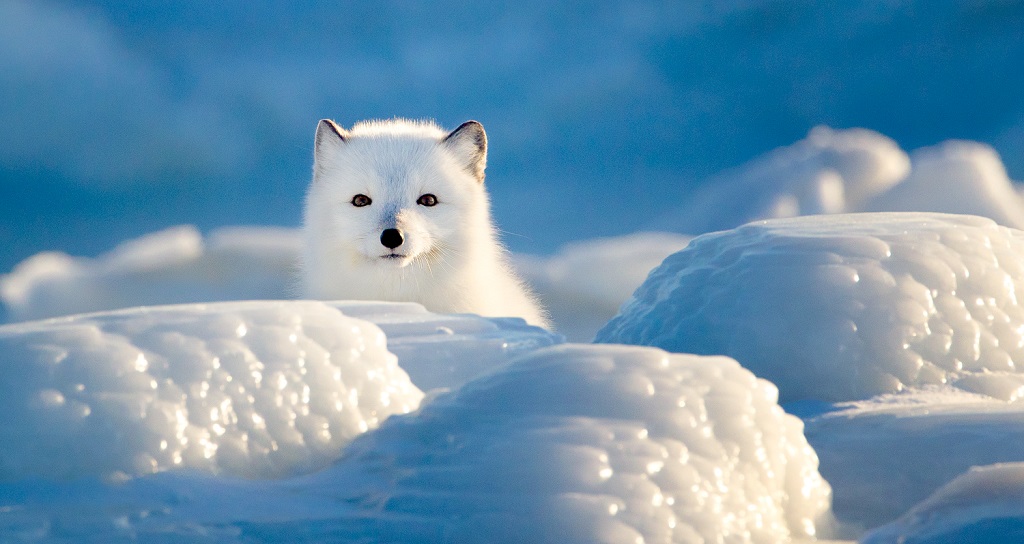 More elusive in the summer, Arctic foxes come out in their full marshmallow-y glory in the fall. Their grey-brown coats turn a pristine white and they fluff up to the size of a large housecat, with their tail making up one third of their length. Changing colours throughout the year allows them to camouflage themselves, whether predator or prey.

People often wonder how something so small survives the sub-zero temperatures, but Arctic foxes have adapted to their environment surprisingly well. Their small ears, muzzle, and short legs reduce the surface area exposed to the cold. Research has shown it takes temperatures of -70°C or -94°F to even get Arctic foxes to shiver. Now that’s cold! And just in case you’re wondering, polar bears don’t shiver easily either. They normally have a harder time not overheating, thanks to two coats of fur and a thick layer of insulating fat. I’ve been told by guides that Arctic foxes in their winter coats have more than a million strands of fur per square inch of their body. I’m not sure who took the time to count, but it’s a testament to their fluffiness. The fur also completely covers their feet to prevent frostbite, like Nature’s moccasins. When a winter storm rolls in, Arctic foxes roll themselves like a cinnamon bun and tuck their fluffy tails over their face, completely protecting themselves from their harsh environment.

Mating season for these fluffy whites is between March and April and involves a lot of chasing and play fighting between the monogamous pair. Also witnessed multiple times, but not well understood, is angry foxes sticking their tails straight into the air and shoving each other with their bums. Guides theorize it has to do with dominance and scent glands, possibly like marking your territory. Cute and frisky, Arctic foxes are nomadic animals that follow polar bears onto the ice in search of food throughout the winter. During the summer they form family groups. The mother and father both care for the young and sometimes a female kit from a previous litter joins in to help care for the new pups. In the wild, Arctic foxes only live for 3-4 years, as there are many predators to evade, including eagles, polar bears, wolverines, red foxes and wolves.

If you’ve seen the classic photo of an Arctic fox nosediving into the snow, they aren’t playing, they’re hunting. Their hearing is so good they can hear lemmings moving underneath the snow. They pounce when they get close. Did you know that Arctic foxes are ecosystem engineers? A fascinating research project was published in 2016 demonstrating how effective they are at growing gardens around their dens. They may not set out with the intention of having wildflowers and vegetation marking the spot of their homes, but it’s a beautiful development of Nature’s cycle. The tundra maintains minimal and very low-lying vegetation, so you can visibly spot Arctic fox dens by the lushness of the vegetation surrounding them.

The researchers tested the soil throughout the seasons and found that the effects of a fox den increased the nutrients in the soil drastically. In June, extractable phosphorus – a major plant nutrient – was found to be nearly 1200% greater around dens. The natural garden growing is due to the defecation, the remains of foxes’ meals, and urination around the den (Gharajehdaghipour, 2016). The extra fauna helps attract herbivores, like the foxes’ main food source, the lemming. Though Arctic foxes are found in the northernmost parts of only a few Canadian provinces and territories, their colourful counterparts have a much larger range and are found throughout the country. Red fox is the common name for these dog-like mammals that come in a variety of colour phases, among them, cross and silver foxes.

Cross foxes have red fur in some areas, but they also have a distinctive black stripe that runs down their back and across their shoulder blades, hence the name. They also often have black fur on their legs, chest and face, mixed in with red.

When we say silver fox, we are talking about the small mammal variety, not George Clooney or Patrick Dempsey. Silver foxes’ melanistic variety displays as a black fox with silver tipped fur, often with a white cap on the end of their tail. Arctic fox in summer coat on the move at Nanuk. Charles Glatzer photo.

As omnivores, foxes in the Artic eat voles, mice, lemmings, rabbits and other small animals throughout the fall and winter. In the spring, they supplement their diet with nesting birds, and are often seen sneaking around the tundra attempting to steal Canada goose eggs. In summer, they add in insects and berries to their menu. They’ve also been known to catch young lake trout by jumping from the bank into a school of fish in shallow water. In short, they’re opportunists.

Foxes will also eat seal pups, beaver, reptiles, fruits and even garbage. (Hinterland Who’s Who, n.d.). Red foxes stock up, hiding their food in the dirt or snow and marking it with urine. I, for one, am glad we have a freezer and pantry instead. These skittish little animals are very sociable and share their territory — also marked with urine — with family groups. In early winter, the males will use its urine, filled with hormones, to attract a mate. Once mated, the couple will find a den, sometimes borrowed from another animal, and in two months a litter of pups, averaging about five, will be born. Foxes are photo-favourites at our ecolodges. Their fluffy tails, delicate profiles and bubbly fun behaviour make them beautiful subjects to watch and photograph. In October and November they can often be seen playfully scrapping with each other, and teasing sleeping polar bears!

My favourite memory of this was watching a small group seeming to egg on their buddy to harass a sleeping bear. As soon as the bear would open his eyes or shift his foot the fox would run back to his friends. Eventually, the polar bear got tired of the game and chased them off for good.

Do you have a favourite fox story or photo you’d like to share with us? Please do!