Building remote ecolodges in the North

Building remote ecolodges in the north is a wilder kind of animal, as Doug Webber, Mike Reimer and Nolan Booth have discovered.

Not only do you have to haul building materials and equipment over some of the coldest, most unforgiving territory on the planet, including the Hudson Bay sea ice, you also need a builder who can conjure up solutions when things don’t go according to plan.

The ability to get along with polar bears is also an asset. The ability to get along with polar bears is an asset when building on the north.

In 1993, Mike and Jeanne Reimer bought an abandoned whale research station north of Seal River on Canada’s Hudson Bay coast, renovated it extensively and turned it into what is now known as Seal River Heritage Lodge. Twenty-six years later, Churchill Wild owns and operates three ecolodges on the Hudson Bay coast and over 4,000 guests have experienced the life-changing adventure of meeting a polar bear at ground level. The 67-year-old from Piney, Manitoba learned his carpentry and finishing skills while apprenticing for his father, Martin, and inherited his first northern building job at North Knife Lake Lodge in 1986, when the head carpenter had to return home.

Friesen went on to work on every major upgrade at the Churchill Wild ecolodges until 2016, and pulled many an Arctic hare out of his magical building cap during his 30 years of working on the lodges. He discovered early in the process of building in the north that a healthy imagination is crucial to success, and Churchill Wild was lucky to have him. The goal was always the same: to achieve a level of comfort for guests that was unmatched in the Arctic. The beautiful finishing touches you see at Seal River Heritage Lodge, Dymond Lake Ecolodge and Nanuk Polar Bear Lodge are all courtesy of Friesen, who takes immense pride in his craftsmanship.

“It’s just a matter of personality,” he said. “Some people just like to see something go up really quickly, and then go onto the next thing. I like to spend lots of time on detailed work, especially if I find someone who appreciates it. Doug was on a budget on that first job, but he really liked nice stuff, so I got to spend a lot of time doing detailed work at North Knife Lake. He just smiled and tried hard not to count the pennies.” Guests at the Churchill Wild ecolodges enjoy “rustic Arctic luxury” now, but it has taken decades of hauling hundreds of tons of material and equipment across the Hudson Bay sea ice to get to that that point, sometimes through whiteout blizzards with temperatures as low as -50 degrees Celsius. Occasionally, a plane would bring in a load of materials and equipment, but that was not the norm with the polar bear lodges. (It’s tough to turn a modified DC3 like the Bassler BT67 around on the runway at Nanuk, but they figured it out when they had to!)

Early in their lodge-building careers, Doug and his merry band of women and men (a.k.a. family members) would use large C46 aircraft to haul virtually every single piece of material and equipment into North Knife Lake. They would wait until May when the snow had melted, transforming the lake into an enormous, icy airfield. The challenge was to get the landed materials safely on shore before the ice melted and they sank forever into the chilly depths of North Knife Lake. According to Mike, Doug even had a dump truck cut into pieces, so it could be flown in and welded back together once on site. Normally, it was the D6 Cat and “Conan” the snow machine that were fired up to lead the annual spring Cat train across the ice on a trip so uniquely dangerous that it was once featured on the Ice Road Truckers television series. For many years, the creature-like Caterpillar tractors charged across the ice at “about two miles an hour downhill with a tailwind,” said Mike.

The Cat train crew was up against jumbled pack ice, huge cracks, high-tide overflow, marauding polar bears, frozen limbs and broken equipment. According to one Cat train leader, “nothing quite beats the adrenaline rush of feeling the ice sag under your load, knowing you’re potentially a split second away from a major disaster.”

And you’d better not forget anything.

There’s no running out to the store to get a bolt or a beam in polar bear country. That’s easier said than done though, especially when your load includes the likes of windows, floor joists, insulation, roof tin, shower stalls, bedroom furniture, solar panels, generators, kitchen tables and chairs, beds, and lumber for decks and viewing platforms.

The crew even hauled a 34,000-pound excavator, a dump truck and a “Beluga Hydration Unit” across the ice, the last of which was designed by Mike’s innovative younger brother, Stuart Reimer, as a means for hauling fresh water and doubling as a fire truck. 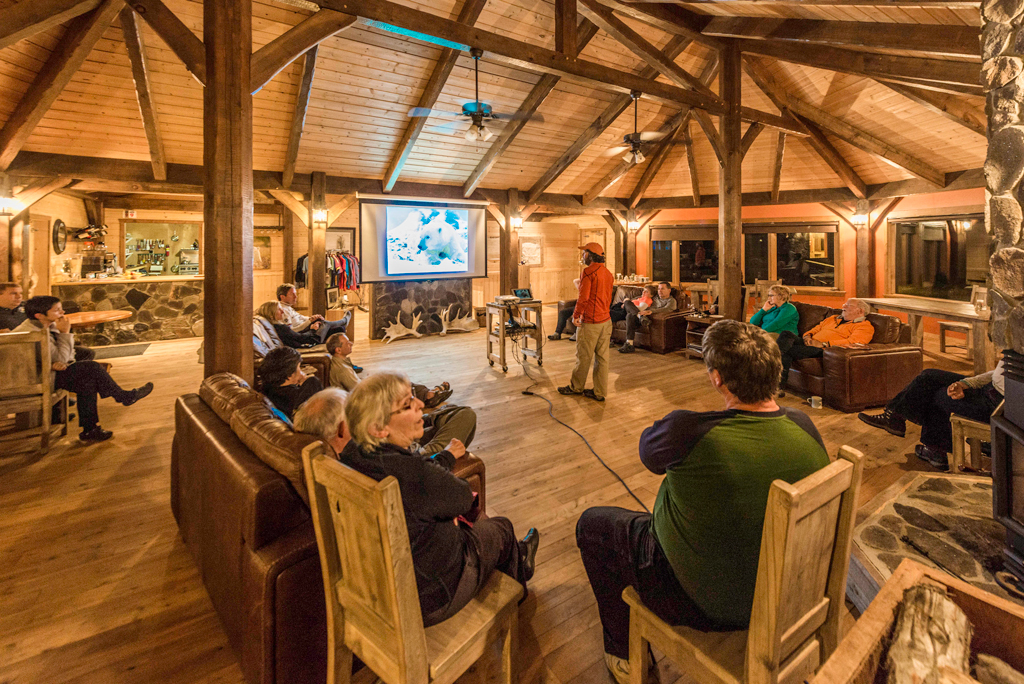 “You have to build everything in your head first,” said Booth. “Then, you get up to the lodge and hope that any mistakes you made in the planning stage are fixable on site, because you’ve got one shot at getting all your big materials in. After that, it becomes very expensive to charter a plane for anything that got missed.”

After Friesen’s first project at North Knife Lake and a stop in Churchill to renovate the Webber home (which included a new kitchen for Helen), his next task was the Wilson Cabin at Dymond Lake, named in honour of a long-time guest. Then it was on to the dining room at Dymond Lake, and it didn’t take long for Friesen to figure out that he would need more than just building and carpentry skills to work on the Churchill Wild ecolodges.

The large dining room at Dymond Lake was supposed to have an open floor plan with engineered beams supporting the 24-foot span between the kitchen and exterior walls. The beams never made it to the lodge and it was suggested that Friesen use posts to support the ceiling.

“Not a chance,” he said. “That wasn’t going to work. I engineered three beams with two by tens and plywood, glued and nailed the heck out of them, took the supports away and hoped for the best.” The beams held. “You learn after a while what works,” said Friesen, whose next project took place at Seal River, where he was asked to create a simple breezeway connecting the main building to the bedroom wing.

“At first glance, it appeared there was just enough material to build a breezeway with a mudroom at the entrance, and maybe a small reading lounge,” said Friesen. “But there turned out to be enough material for quite a big building. Mike wanted it to look rustic, with a frontier-style entrance, like the false fronts they had on old western hotels, so we created a bit of a timber frame entrance.

“Jeanne didn’t know a thing about this. She was expecting to see a little breezeway connecting the two buildings. When she walked down the runway, I could see her eyes getting bigger and bigger and bigger as she realized what had happened. Her reaction was just priceless.” And, of course, when it came to construction, there were always polar bears to be wary of.

On one occasion, Friesen was out in the open working at Dymond Lake after dark. There was no fenced-in compound at the time, and when he finally decided to shut down, he looked up and saw a pair of eyes reflecting out of the willows 20 metres away from where he and his crew were working.

“I saw his eyes and I took a detour around the other side of the lodge to go back to the kitchen,” said Friesen. “I have no idea how long he was there. He was just curious, watching us. You have so many encounters with polar bears that after a while you can get a little too cavalier, which isn’t a good thing. Looking back, I should have been more cautious.” “Nothing is certain when working in the north,” continued Friesen. “When the sun is out, you can put in long days and the light really energizes you. But you can also get snowed in for three days. You have to be resilient and go with the flow. You are very much dependent on the weather. Planes get there when they get there, and they leave when they leave.”

Although Friesen worked on all three Churchill Wild ecolodges after getting his start at North Knife Lake, Dymond Lake Ecolodge will always have a special place in his heart.

“We call it ‘our’ lodge,” said Friesen. “Our family does. My wife Elaine came along with me to Dymond Lake when the kids were out of school. That’s where our kids cut their teeth on northern life. Elaine worked as the camp cook for my crew and later went on to become the head chef at Dymond Lake, but there were many times when it was just us and our children. Spending five or six weeks a year there building — and building a family — those were good times.” While Dymond Lake Ecolodge will always be Friesen’s favourite, he was pleasantly surprised to learn that Seal River Heritage Lodge and Nanuk Polar Bear Lodge had become two of the 56 (now 63) National Geographic Unique Lodges of the World.

“You mean I can say I worked on four per cent of the world’s best lodges?” he asked.