An old warrior polar bear took his final walk at Seal River Heritage Lodge this fall. Affectionately named “Pete” by guests, he was thought to have been at least 20 years old. It was difficult to see a true “King of the Arctic” in his final days, and it was a very emotional time for guests, but this was no climate change poster child.

“Warrior Pete” had lived life to the fullest, won many an Ali-Frazier battle over the years, and outlasted all his rivals, while fathering numerous offspring. He had lived a full and fabulous life, and was known to the guides. You could understand where he was at with nature, by looking in his eyes.

Churchill Wild guest Jenny Loren was on the Polar Bear Photo Safari at Seal River Heritage Lodge when Pete came around, and she wrote about her emotional encounter with him on Instagram.

“The Old Man and the Sea… I love this book. I read this book again after losing my father in a car accident. I found comfort in it. My father survived 33 days from his injuries before he passed. Seeing this old bear brought back all my feelings again about Hemingway’s story. The last fight on our journey.

“This is a male polar bear at the end of his life. Our wonderful guide Andy MacPherson knew this bear’s history. When we saw this fellow he was so thin. It was heartbreaking. Andy let us know it was from old age and that this polar bear had thrived for years. It looked like this would be his last trek up north on the ice. Andy told us to look into his beautiful face because it told a story. This was a special moment and privilege being up close with a bear that had lived…” ~ @jennyloren_ on Instagram

Pete made appearances on and off over the summer at Seal River Heritage Lodge. He would stop at the lodge, peruse the area, do his walk around, spend a day or two and then wander off. The longest he was away from the lodge was about 10 days, and he came back in October.

“I’m guessing he was in his twenties,” said Churchill Wild Head Guide Andy MacPherson. “In his prime he was a big dominant male bear. You could tell by his skeletal size that he was huge. Probably around 1,000-1,200 pounds but he could have been as big as 1,400 pounds at his healthiest.”

Just imagine what Pete’s life was like growing up in the Arctic, which can be a harsh and unforgiving environment. Polar bears spend their first 2 ½-years with Mom, and 50% percent of them don’t survive those early years, depending on the health and age of the mother, her experience and her ability to hunt, provide for, and protect her cubs. Ice conditions, seal populations and numerous other environmental factors also play a part.

“If they can get through that first year there’s a good chance they’ll make it to their third year,” said MacPherson. “When Mom pushes them away at 2 ½ to 3, the mortality rate is again 50 percent. They might be too small. They might not have paid attention and learned enough. There could be a bad ice year and they might not be able to break through to get the seals, or they don’t know how to break the ice. And they’re on the bottom of the rung once they get out on their own. Other big males might predate on them. They have to learn to avoid certain bears.”

If they can make it to age six, they’ll probably make it to adulthood. Ages three to five would be considered sub-adult. They’re likely not breeding at that stage unless there is a rare opportunity. The big males keep them away. It’s estimated that there are three males to every female, and there’s a good chance Pete wasn’t even breeding before age eight or nine. 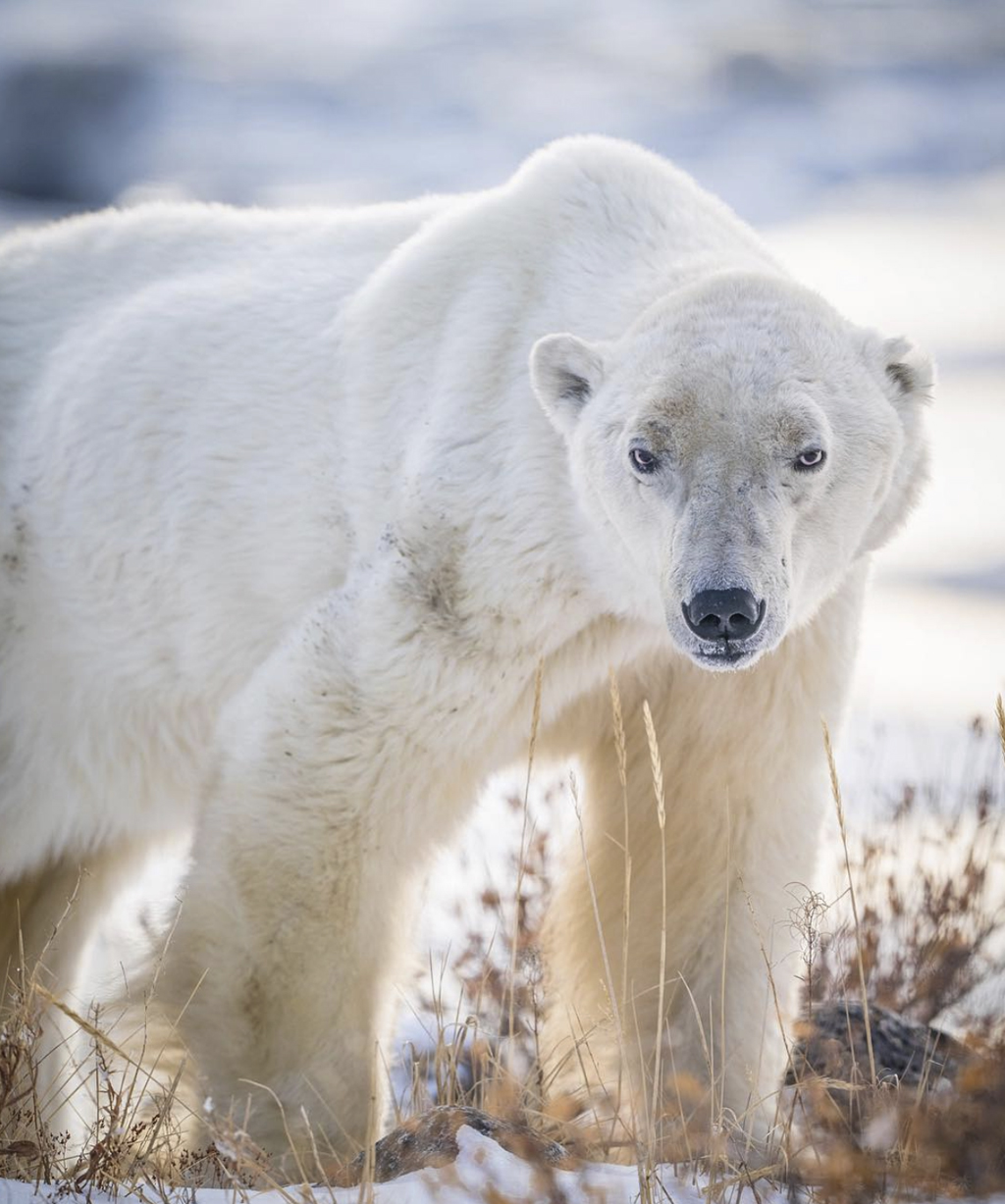 In his prime Pete was probably 1,000 to 1,200 pounds. Nate Luebbe @nateinthewild of @sonyalpha Instagram photo.

The battle for breeding rights in the spring is fierce, and while one bear will usually back down, that is not always the case. Fights over females can result in severe injuries that include broken teeth, ripped flesh, broken jaws, injured limbs, broken bones, infections and in Pete’s case, a missing ear. The sparring that occurs in the fall is a far cry from an actual fight for breeding rights.

“When they’re playfighting in the fall it’s almost silent,” said MacPherson. “There’s no noise, just the sound of impacts, exhalations, inhalations, heavy breathing. When they’re actually battling for the females in the spring it’s going to be vocal. Sparring in the fall is a precursor, they’re testing themselves, getting in shape to get back out on the ice hunting, and sometimes just plain having fun.”

Polar bears are often portrayed as non-social animals, but MacPherson doesn’t believe that’s entirely the case after seeing a group of three males together for several years at Seal River.

“We’ve probably watched them for eight years now,” he said. “We call them the Three Amigos. In the beginning they were probably five or six years old, but now they’re in their prime. They must come back to the same area every year and look for each other. There’s one huge bear and two big bears. They hang out together during the summer and spar in the water.”

The trio likely splits up during the winter to hunt and meets up again in the summer after breeding season. They have to hunt individually, as each of them could eat a 200-pound seal in one sitting and there wouldn’t be enough to feed a group. Competition for breeding rights in the spring is also a stressful time, and they seem to avoid stressful times together. Sounds like a good way to stay friends over the years, and just imagine the stories they have to tell each other about their solitary lives on the ice during the winter and their spring battles.

Respect for Pete was evident during his last visit to Seal River, when a younger bear left some food for him. It wasn’t a lot of food, and the younger bear could easily have trotted off with it. Instead, he left it for Pete.

“He was a much bigger adult bear in far better shape,” said MacPherson. “He could have easily sat there and told Pete to back off. Instead he had a little nibble and when Pete headed in his direction he just dropped it and walked away.”

The younger bear later tried to approach Pete, but the old guy growled at him with a soft roar and he backed off. The younger bear was trying to engage in play, but Pete wasn’t interested.

“One night the young guy walked up to Pete and laid down beside him,” said MacPherson. “They spent the night together sleeping out in front of the lodge. It seems there’s quite a bit of respect shown to these old guys by the younger bears.”

If you’ve spent most of your life around animals, you can can learn quite a bit about a bear from their body language and their interactions with other bears. You can look through their scars and into their eyes and get a sense of how they are feeling and how their life has been lived. But just imagine how much a bear understands about another bear. These bears know each other’s lives intimately, much better than we ever could, and respect was definitely evident for Pete.

“When we were out on hikes, he would tend to avoid us,” said MacPherson. “He would recognize we were there and give us space and we would do the same for him. He came up to the lodge a number of times and would walk by and give everyone a view. We had to explain to the guests to be careful about what they say in public about an animal in Pete’s condition. It can easily be taken out of context and it’s very easy to misinterpret. You have to know the whole story.

“You just don’t see bears that old. In the past 12 years I’ve only maybe seen five bears that have been like that. Most don’t make it that far, to that advanced age, unless they’re truly one of the Kings of the Arctic. His life is written on his face.

“This was a bear that had lived his life. How may ladies had he fought for and won? How many cubs had he fathered and how many seals had he devoured? This was a bear who came, saw and conquered. And just think of all the changes he must have seen in the Arctic over the past 20 years. He’d outlived all his buddies and he’d come back home to see us during his final days.” “We were fortunate to see Pete coming very close to the lodge,” said guest Christoph Jansen. “It was one of the most touching encounters we have ever had. It was an honour to meet Pete.”

Polar bears are creatures of habit and there’s a very good chance Pete was one of the first polar bears ever to visit Mike and Jeanne Reimer and their guests during the early days at Seal River, when they were first starting out with Churchill Wild. He might even be one of the big healthy bruisers found in our Anniversary Book photos that stretch back over the past 25 years, or one of the bears in our 25 Years of Polar Bears, A Photo Gallery post.

Pete probably won’t make it back out on to the ice this winter. The last time we saw him he was wandering off to take a nap in soft snow not far from the lodge. It was an honour and a privilege to have this true King of the Arctic at Seal River with us for his final autumn. He gave us a poignant glimpse into his life, well-lived. No one will bother him now, and soon, he’ll fall asleep, peacefully, forever.

Nature can be kind to its warriors.