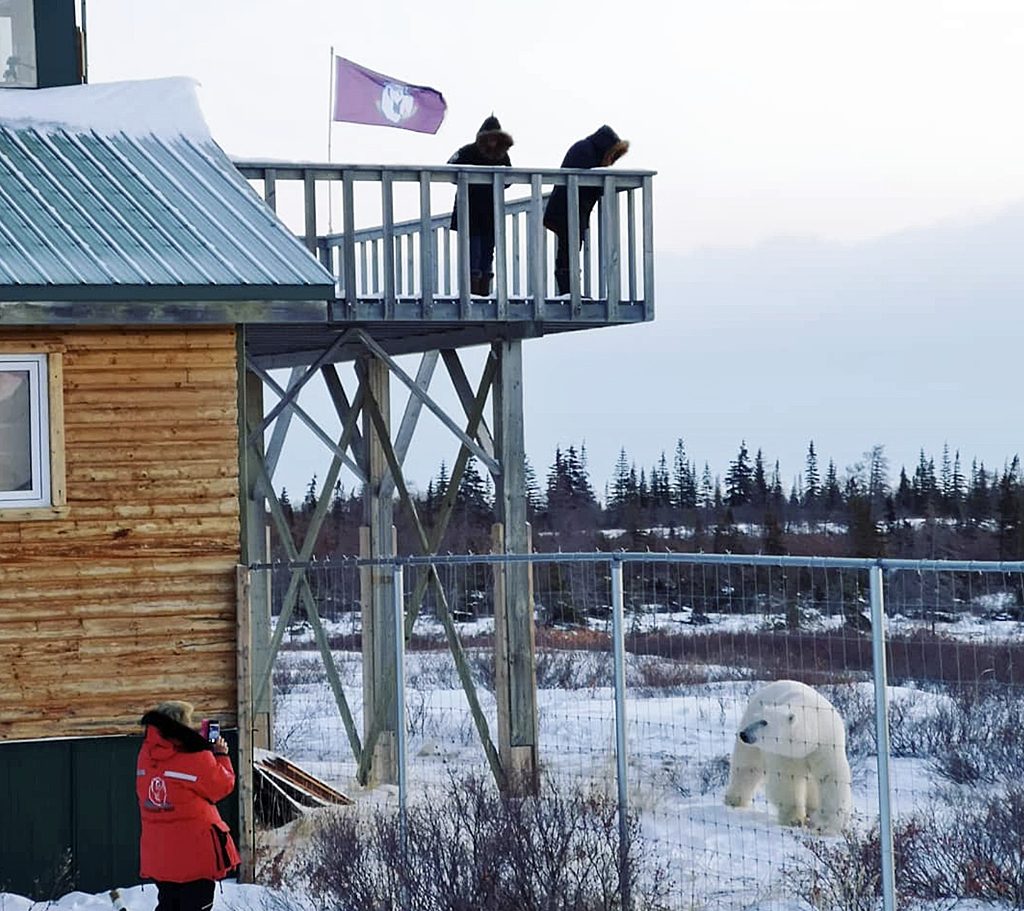 “It was our best year ever for polar bears at Dymond Lake,” said Churchill Wild Director of Operations Nolan Booth. “Within a day of freeze-up we had bears at the lodge. And that was before the Great Ice Bear Adventure began.”

Dymond Lake is landlocked, but it’s only one kilometre from Hudson Bay, and just north of Button Bay, which is a part of Hudson Bay that freezes up earlier than the big bay does. The ice attracts polar bears, which are hungry to get out on the ice for their winter hunting season. This year marked the second earliest freeze-up at Dymond Lake in almost 50 years. Dymond Lake Ecolodge is only a kilometre from Hudson Bay. Scott Zielke photo.

“The north wind blows the ice down from Seal River and the other rivers that flow into Hudson Bay,” said Booth. “So the ice comes earlier here and the bears show up. Our bears were already out hunting and there was still open water at Seal River Heritage Lodge.” “It was colder than usual this year,” said Booth. “Generally from minus 15°C (5°F) to minus 40°C (-40°F) with the windchill. But everybody dressed for it. They all listened to the clothing lecture. You absolutely have to be dressed for it, and if you are, you can have a great time. A few guests needed the odd piece of gear but we made it work.”

Semi-resident polar bear Scarbrow made two appearances at Dymond Lake Ecolodge in 2018, both early and late.

“We were so happy to see him again,” said Booth. “This year he was there to welcome guests on the first day and then he disappeared for a while, but he was back to see guests off in the final few days. He comes and goes. He just does what he pleases. One of the cool things we learned about him is that he goes back into the forest. We saw him walk across the lake and climb up into a bluff. He was just curled up in ball in the trees and wanted to be left alone, so we didn’t bother him.”

Scarbrow has been visiting Dymond Lake Ecolodge on a regular basis for nine or 10 years now. He’s big, happy and healthy and can often be a ham for the cameras.

“He’s probably somewhere between 1000-1200 pounds now,” said Booth. “Massive. It’s hard to put in perspective how big he actually is. And he’s become a guest favourite. Guests have even started to talk about him online and post about him.”

Canadian explorer and photographer Dax Justin had a field day with Scarbow last year while on assignment with Canadian Geographic, capturing some excellent photos of Scarbrow on his daily adventures. Polar bears are not often named at the Churchill Wild lodges, but occasionally one will be so distinctive they automatically attract a name from guests and staff. “We think we saw Scarbrow’s Mom the first year we opened Dymond Lake,” said Booth. “Every morning she would come across the lake with her cub, walk up the road and go to the bay. If there were any big bears around, they would run back into the forest and hide. The next year we had a cub, a newly alone bear, doing the same thing. Near the end of that year he got in a fight with a wolverine, which is why he has that scar over his eye. He’s been easy to recognize ever since, even years later.”

The crew on the Great Ice Bear Adventure think they might have another Scarbrow sibling in their midst too.

“This year we had a young cub behaving just as Scarbrow and his mother did in the past,” said Booth. “Walking from the forest to the lodge and the bay, looking out for big bears, hanging around if the coast was clear and heading back into the forest if not. We had a Mom with two cubs last year and we think that might have been Scarbrow’s Mom.” Dymond Lake Ecolodge had a few more upgrades in 2018, which included work on the decks, a new heater for one of the main cabins and 16 new solar panels, and while the upgrades added to guest comfort, it was really the people who made the season a resounding success, both staff and guests. Veteran Churchill Wild guide Terry Elliott led the team in the field along with Churchillian Norman Rabiscah and Kevin Brightnose, who also guides fly-in fishing trips at North Knife Lake Lodge.

“We had all happy people this year,” said Booth. “The guests were fabulous, they loved the culinary experience, and we had an unbelievable team, from chef Arnaud Picot and the kitchen staff to housekeeping, maintenance, admin and guides, it was an incredible year.

“Everything just worked and it made my season.” This is the place to see polar bears!

We (myself, my husband, and 2 kids, ages 12 and 14) just returned from a 4 day stay at Dymond Lake where we did the Great Ice Bear Adventure. We had an amazing time. Food was delicious, the staff made everyone feel like part of the family, and you just can’t beat walking up to polar bears! ~ Megan19712004, Silver Spring, Maryland

This is not a lodge, it is an experience and an experience like no other in all good ways! Of course it is all about the polar bears. You at the lodge are in their environment — they look in through the fence at you. And SO close! There is nothing like observing these beautiful white creatures’ natural behaviors in their habitat. ~ tid105, San Diego, California

I cannot say enough good things about Churchill Wild. Every aspect of the experience, accommodation, and service was phenomenal. If you want to get out in nature and walk with polar bears at an unbelievably close distance, Churchill Wild’s travel packages and lodges are for you… world-class experience… ~ AtoOzTravel

The very best nature and adventure travel of my life

10 out of 10 on every count: location; lodge; nature; quality of excursions; wildlife; expertise, professionalism and courtesy of the guides; service quality and care of all other personnel; breakfast, lunches and dinners of the highest standards; evening talks. I have been in many places, but Dymond Lodge beats them all. I will certainly be back. ~ Tomaso S, Toronto, Canada

Viewing polar bears at close range, with no barriers, is an exhilarating experience and you can do it in style at Churchill Wild’s Dymond Lake Ecolodge. A complex operation is run seamlessly by highly skilled and enthusiastic staff and management. The accommodation is comfortable and the food outstanding. For the trip of a lifetime in a very remote location, this seemingly expensive adventure actually represents great value for the money. ~ Floydeboy, Hobart, Australia

The idea of seeing polar bears in their natural habitat was on our bucket list for a while. After researching online we decided to go with Churchill Wild and are so glad we did… It is just incredible to see polar bears at ground level; sometimes quite close when they were outside the fence around the lodge… This is a family run business and they really care about making sure you are well taken care of. This is a once in a lifetime trip that is definitely worth it. ~ CathyP894, Nepean,

I don’t think you can beat the Polar Bear experience at Dymond Lake Lodge. Each morning we woke to a bear digging for berries in the snow outside our window. Our treks around the lake and out on the shore of Hudson Bay were wonderful… close encounters with curious bears, the sculptures… the remote wilderness.” ~ MollyM6445

My wife and I just returned from 4 days at Dymond Lake Lodge and we can’t say enough great things about the experience. All parts of our trip equaled or exceeded our expectations, which already were quite high based on what we already knew about the Lodge. ~ BobRedwoodCity

Amazing Experience if you want to walk with polar bears

I’m not usually a fan of group tours and that hasn’t changed, however if you want to walk with Polar Bears then this is the trip for you… the polar bear experience was amazing. Walking with these animals was so special. ~ CHR1515 Jersey, United Kingdom