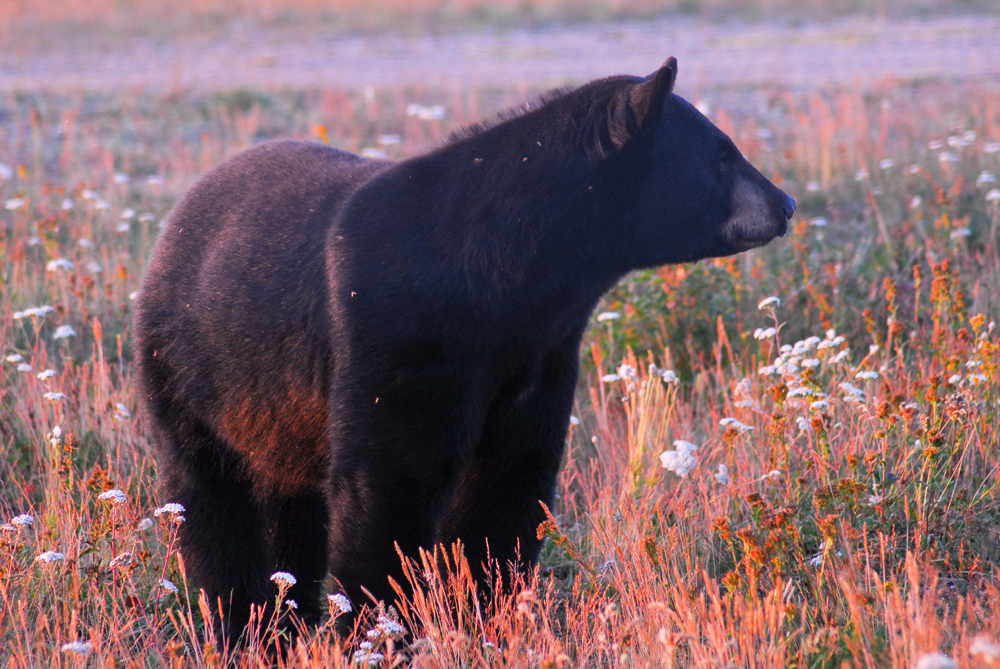 Ecosystems of the Hudson Bay coast 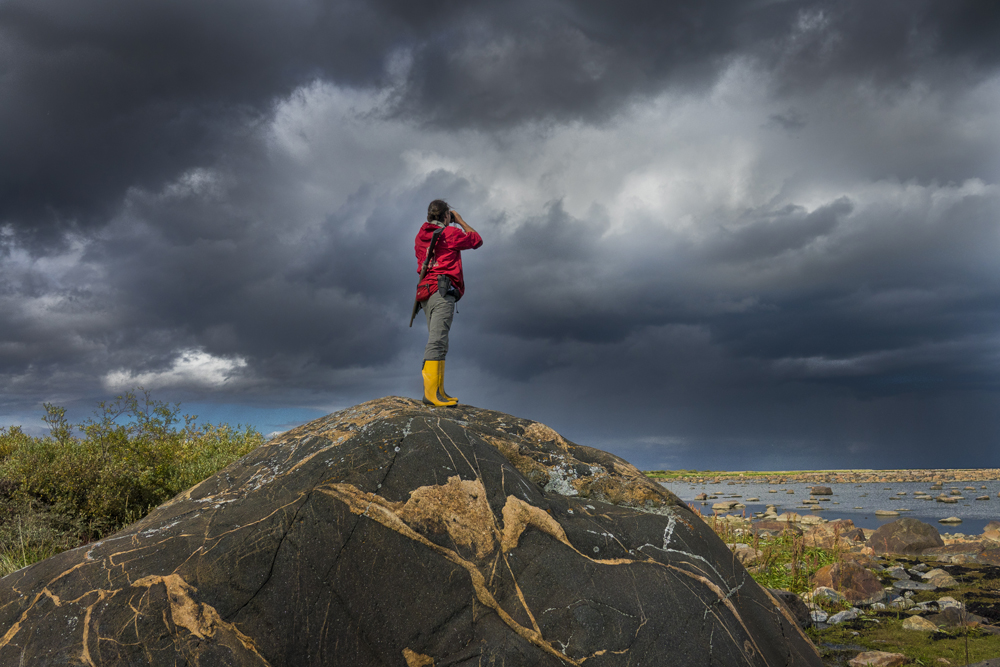 The coast of Hudson Bay has been teeming with wildlife since the last Ice Age ended approximately 11,500 years ago. A totally unique ecotone — where four varied ecosystems are enveloped in a southern climate modified by a vast cold ocean — creates conditions where polar bears, black bears and grizzly bears coexist, where caribou meet moose, and where birds from the Arctic mix with birds from the prairies.

The most spectacular and beloved residents of Hudson Bay are polar bears. The largest land carnivores on earth, polar bears leave the sea ice and arrive on the Hudson Bay coastline in July, where they roam and rest along the coast or prowl around our Lodges until the ice forms again in November. The bears then venture back out on to the ice in search of seals, their primary food source and favourite meal. Polar bears are not the only large mammals living on the Hudson Bay coastline. Caribou congregate along the shore to escape insects and browse on the rich vegetation. Wolves follow the caribou, and have their pups in the beach ridges.

Offshore, orcas and rare bowhead whales make appearances, and to the delight of our Lodge guests, thousands of beluga whales gather in the Seal River Estuary during the summer. Seal River Heritage Lodge is only a short 8 km boat ride from Seal River and it has acted as the base for hundreds of travelers to interact with and photograph these very vocal and social whales.

Polar bears and belugas share the Hudson Bay area with a great many other creatures during the summer. We watch Arctic and red foxes, Arctic hares, sik siks and an amazing variety of nesting and traveling shorebirds, geese, songbirds, fish eaters like the Arctic tern with its brilliant red beak and feet, and hundreds more. Hudson Bay is the dominant influence on the weather which surrounds it. The “Cold Ocean” makes the lands that border it resemble the high Arctic regions much further north. Hudson Bay is shallow, less than 600 feet deep at any point, and currents and wind action constantly break the ice cover, making the Bay an excellent habitat for ringed, harbour and bearded seals, as well as for the polar bears that depend on them as a food source. Several bird species live their entire lives on or near the Bay, including the Hudson Bay eider duck, which lives all winter on the shore leads in the ice, diving for mussels. The coast of Hudson Bay, from the shore leads in the ice to the taiga forest inland, is an area thriving with wildlife that borders the taiga, the northern coniferous boreal forest, and the expansive treeless tundra further north. The vibrant meeting of ecosystems brings together an amazing number and diversity of species. Plants and animals associated with southern biomes live alongside species from Arctic and marine habitats. And interestingly, while the Hudson Bay lowlands have always separated ecological areas, they have also separated people. The Dene and Cree were people of the forest for the most part, while the Inuit lived on the northern coast and the tundra.

Creatures including snowshoe hares, lynx, red squirrels, martins, fishers, moose, black bears, warblers, woodpeckers and a variety of others, also venture to the forest’s edge but rarely beyond it. Other species such as the Arctic hare, Arctic fox, barren land grizzly, ptarmigan and snowy owl, make the tundra their home. And a few species, such as caribou, spend their summers on the tundra and their winters in the taiga, while marine mammals including seals, beluga and bowhead whales, and polar bears, are tied to the water and ice of Hudson Bay. Arctic fox pouncing on a sound from below at Seal River. Any Skillen photo.

THE TAIGA – LAND OF LITTLE STICKS AND STONES

The taiga, also known as the boreal forest, exists as a nearly continuous belt of coniferous trees across North America and Eurasia. Overlying formerly glaciated areas and patches of permafrost on both continents, the taiga is a mosaic of successional and subclimax plant communities sensitive to varying environmental conditions. Taiga is the Russian word for this forest, which covers so much of that country and is, for the same reason, appropriate for North American use as well. 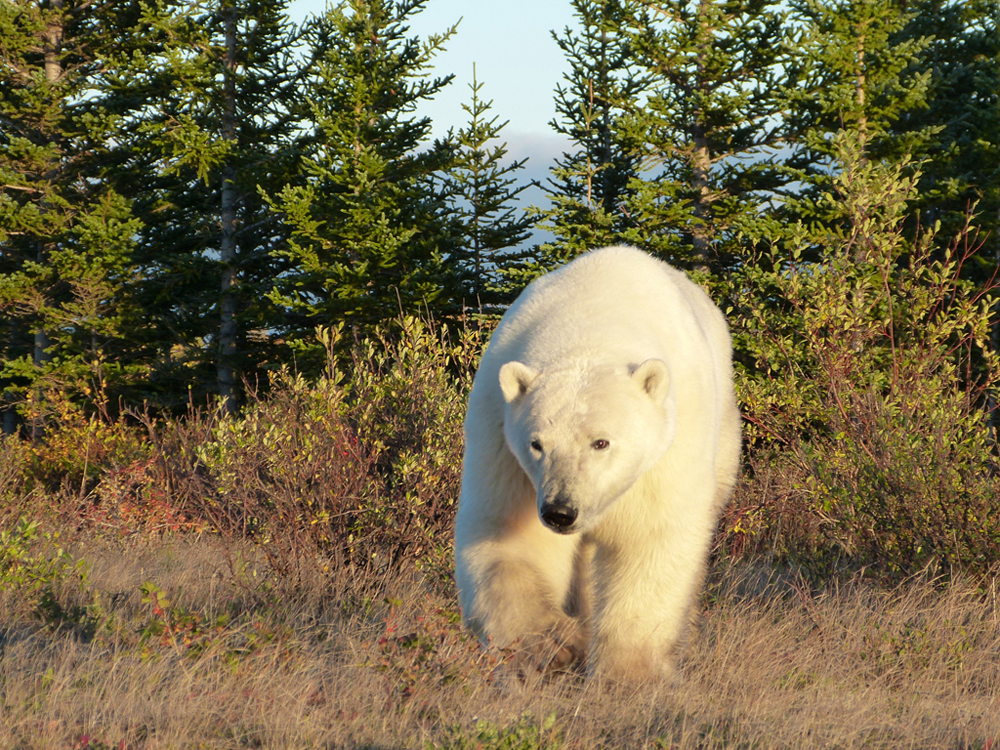 Polar bear emerges from the taiga at Nanuk.

In contrast to the taiga, the tundra is wide open, spacious and the coldest of the biomes. The word tundra comes from the Finnish word tunturia, meaning “treeless plain.” The tundra receives low amounts of precipitation, making it similar to a desert in many ways. Vegetation on the tundra has adapted to the cold and the short growing season (on average 50 to 60 days). Mosses, sedges and lichens are common, while trees are few and concentrated near waterways. The trees that do manage to grow on the tundra stay close to the ground and are insulated by snow during the cold and windy winters. Many animals make the tundra their home year-round, including Arctic fox, Arctic hare, sik siks (Arctic ground squirrels), and even some bumblebees that hibernate all winter. Migratory species such as waterfowl, shorebirds and caribou avoid the most severe conditions of winter, but return to enjoy the flush of productivity on the tundra during the summer. Each year, at the end of the very short growing season, the caribou move southward into the boreal forest or beyond, later returning to the tundra to breed.

For eco-wildlife travelers the Hudson Bay coastline offers a unique glimpse into nature’s powerful ability to mix, match and blend its treasures into a rare form of beautiful.

A rare form of beautiful.