Beluga whale viewing is always a highlight for guests on our Birds, Bears and Belugas, Summer Dual Lodge and Arctic Discovery safaris. Their white skin reflects the blues and greens of Hudson Bay and can be seen from hundreds of feet above, giving them an ethereal appearance. They’re not just beautiful to look at though! Belugas are a fascinating species of whale.

Beluga whales are the only member of the genus Delphinapterus and one of two members of the family Monodontidae, along with the “unicorns of the seas” otherwise known as narwhals. Belugas and narwhals don’t interact very often despite sharing much of the same habitat, but it does happen. One special case featured a seemingly adopted narwhal captured on film swimming in a large pod of belugas. Belugas are curious and friendly, so it’s not a stretch to think they would be willing to adopt a cousin into their fold. Belugas are being researched for their ability to babysit for other whales, a bright alternative to euthanizing or zoo placement for baby whales that occasionally wash up on shore alive. This is mostly a concern in the St. Lawrence River population, which is struggling under the bombardment of heavy water traffic, noise pollution and chemical pollution. Research conducted by graduate student Jaclyn Aubin in 2018 seeks to prove that the expense of rescuing and reintroducing baby belugas to a new pod will be worth the cost. We hope so!

Thankfully, due to very little pollution and water traffic, the western Hudson Bay population of beluga whales is still doing well. It is under consideration however, for being listed as “special concern” under the Species at Risk Act (SARA), and other beluga populations in the world are already listed as endangered (Fisheries and Oceans Canada, 2020).

Musical creatures, belugas have displayed great interest in listening to cellist Rob Knaggs and singing tourists on our summer polar bear safaris. Maybe they’re amused by our antics, but their smiling faces are too cute to resist making a fool of yourself.

A beluga whale’s hearing range is far greater than that of a human. Our hearing range is 0.02 to 20 kHz, whereas belugas can hear from 1.2 to 120 kHz (SeaWorld Parks & Entertainment). I did some research into sound and found that a mosquito buzz has a frequency of 17.4 kHz, which is extremely annoying and at the top end of our register. Another example is a dog whistle, which we already know we can’t hear, because it has a frequency that ranges from 23 to 54 kHz.

Now just imagine all the different sounds a beluga is hearing! One group of sounds they hear for sure are the squeaks from our rubber Zodiac boats. They seem to be attracted by these squeaks (along with our usually out of key singing), and they often come by to say hello.

These pure white whales also have excellent eyesight in and out of the water. If you think they’re looking at you, they probably are! Occasionally they’ll bring their babies by and push them to the surface so they can see a human for the first time. The babies stay greyish brown for two years, which is about the same amount of time they are nursing. Gestation is around 12-15 months and they give birth every three years or so (Whale Facts, 2020). Interestingly, guests are often sharing a first-time viewing experience with baby belugas.

During the winter, belugas in the Arctic often pass through water that can reach temperatures as low 0°C (32°F). Yes, that’s freezing! The western Hudson Bay population spends its summers around the mouth of the Churchill, Seal, and Nelson rivers and when the rivers begin to freeze, they move up to the Hudson Strait to wait out the winter in areas where they can avoid getting trapped in the ice.

These pure white whales have excellent eyesight in and out of the water.

Some years ago, on a truly epic day at Seal River Heritage Lodge, orca whales, a main predator of belugas, made an appearance in Hudson Bay and were visible from the lodge. Luckily for the belugas, it was high tide, and they could use the shallower water to hide. Although the orcas were a long way off, we could see their fins from the shoreline as they hunted for stray belugas.

Simultaneously, a polar bear decided to use this good fortune to practice his hunting techniques by attempting to pounce on a passing beluga. It must have been the bear’s first time trying this, because he came up empty pawed every time. It was quite a wild spectacle for our guests, and for the crew filming the new BBC Earth series, Seven Worlds, One Planet, with the water literally bubbling with pods of belugas running into each other, their tails flipping out of the water as they sought shelter. 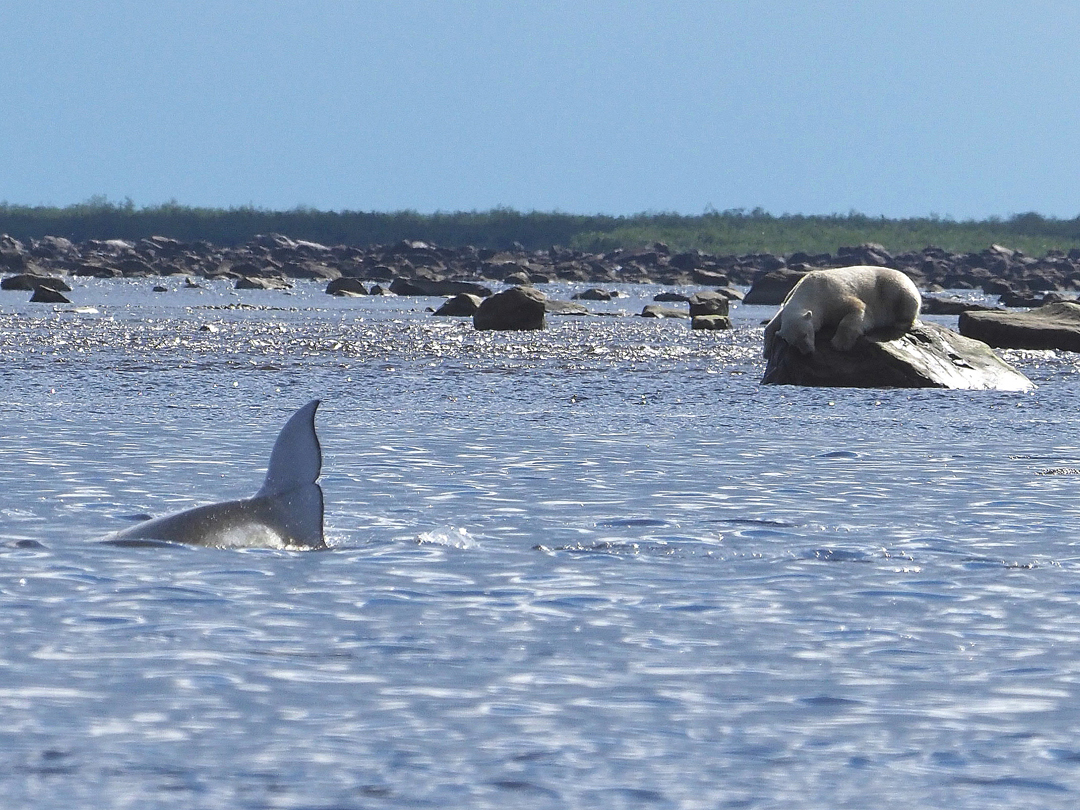 There are many other aspects of beluga whales that make them interesting to the world. Below are a few more of my favourite beluga fun facts.

Do you have anything to add? Any questions we can answer? Please let us know in the comments!