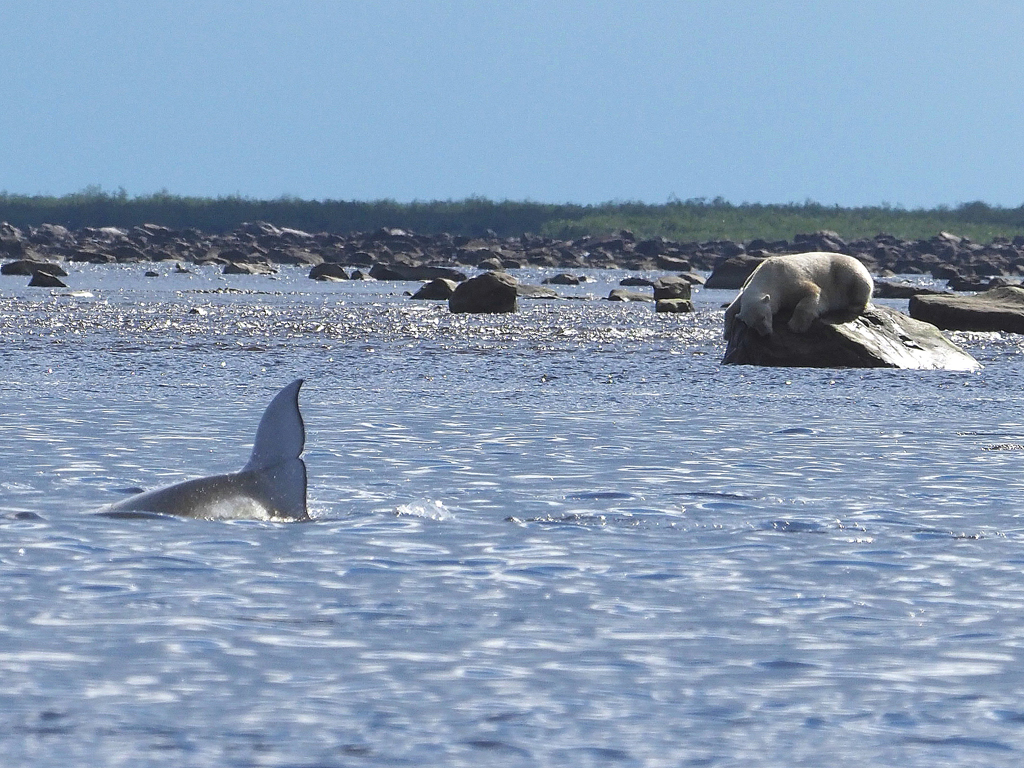 “As a wildlife film crew we’ve been all over the world, but rarely have we received a warmer welcome than at Seal River Lodge. No matter how odd our hours or challenging our request, nothing was too much trouble. The lodge sits majestically overlooking Hudson Bay, the rooms are comfy, the lounge areas luxurious and the food exquisite. But what makes the place truly special is the close encounters with polar bears and beluga whales. Once you’ve heard the breath of a big white bear while on foot and snorkeled with curious, singing whales swimming right up to your face to check you out, you’re spoilt for life. To top it off, the staff were tireless in their positive, friendly, can-do attitude — one of the best teams I’ve ever worked with. There’s nowhere quite like Seal River Heritage Lodge in the world.”
— Chadden Hunter, Producer, Planet Earth 2 /  Seven Worlds, One Planet

The polar bears of Seal River are about to become even more famous for their hunting prowess, but this time they’ll have something different on the menu.

Rare footage of polar bears hunting beluga whales at Seal River during the summer was captured by Australian wildlife biologist and filmmaker Chadden Hunter, and will appear in the second episode of the spectacular new BBC Earth series, Seven Worlds, One Planet.

Narrated by David Attenborough, the series showcases animal behavior around the world and includes incredible footage from 41 countries in seven continents, while also discussing the impact that humans have on the planet. The first episode, which aired last Saturday, covered Australia. Canada will be featured in the episode on North America, which is slated to air on January 25.

Hunter and his two-man crew stayed at Seal River Heritage Lodge while filming and were aided by Churchill Wild guide Quent Plett. The crew used our specialized Oddney II boat to capture what is believed to be the first ever footage of the polar bears hunting belugas.

Using an extreme brand of patience honed on the ice hunting seals, the polar bears spend hours perched atop giant boulders waiting for the beluga whales to swim into the mouth of the Seal River and then pounce on the whales at just the right moment.

“When we were filming this behaviour, a lot of scientists couldn’t believe that it was happening,” said Hunter in a recent Canadian Press article entitled Canadian polar bears’ ‘ingenious’ survival strategy seen in BBC Earth series, by Victoria Ahearn. “There was absolutely no records in scientific papers, there was no studies on it, and a lot of scientists are champing at the bit to get into this Seal River area to study this group of polar bears to see if they can study the behaviour more.” Churchill Wild co-owner and founder Mike Reimer has observed the summer hunting behaviour at Seal River for the past 10 years and has welcomed film crews at their lodges for decades, but agreed that the new hunting behaviour was attracting additional attention from around the world.

“We’ve had a lot of interest in this and we’ve had film crews at the Churchill Wild lodges consistently for the past five years,” said Riemer. “Last year we had two crews, one was based out of Seal River Heritage Lodge and the other was based out of our camp at Hubbard Point. I was at Hubbard with Red Rock Films, who were filming for National Geographic, and their main focus was on the beluga whales around the reefs. The polar bears and the whales interacting were a bonus. We had the Sherp ATVs and the Zag Fab boat at Hubbard, while Quent looked after the crew at Seal River and used the Oddney II.” Professional photographer Matt Breiter was one of the first to do work for National Geographic at the Churchill Wild lodges and last year Bertie Gregory was filming at both Seal River Heritage Lodge and Nanuk Polar Bear Lodge for the National Geographic series Wild_Life: The Big Freeze.

“They’re starting to include Nanuk Polar Bear Lodge in some of their shoots now, for the polar bear and wolf interactions,” said Reimer. “We have film crews every year and we usually start putting the trips together in January and February.”

While never-before-seen footage has already been captured around the Churchill Wild lodges, the new Sherp ATVs are expected to open up a whole new world of exploration for film crews and elite adventurists.

“We’re no longer bound by winds or tides or bad weather,” said Reimer. “The Sherps are essentially a boat with wheels and they can travel over any type of terrain. They’re water-tight and can go to the edge of the ice flows. We can travel in just about any kind of conditions and set up camp anywhere and everywhere.”

Reimer plans to offer small, customized, one-off TransArctic Expeditions in the future, for film crews and individuals who are looking for an ultra-exclusive high-end experience — for those who want to go where no human has ever gone before.

“This will be cutting edge,” said Reimer. “Akin to the first treks across Africa, which opened up vast new areas. That’s what this is going to do. It’s going to eliminate some of the barriers to exploring and help us establish some exciting new adventures. It’s going to be super edgy, but it could be phenomenal. Imagine cruising along the edge of the ice and watching polar bears hunting seals.

“Who knows what we’ll find out there. Nobody has ever done it.”