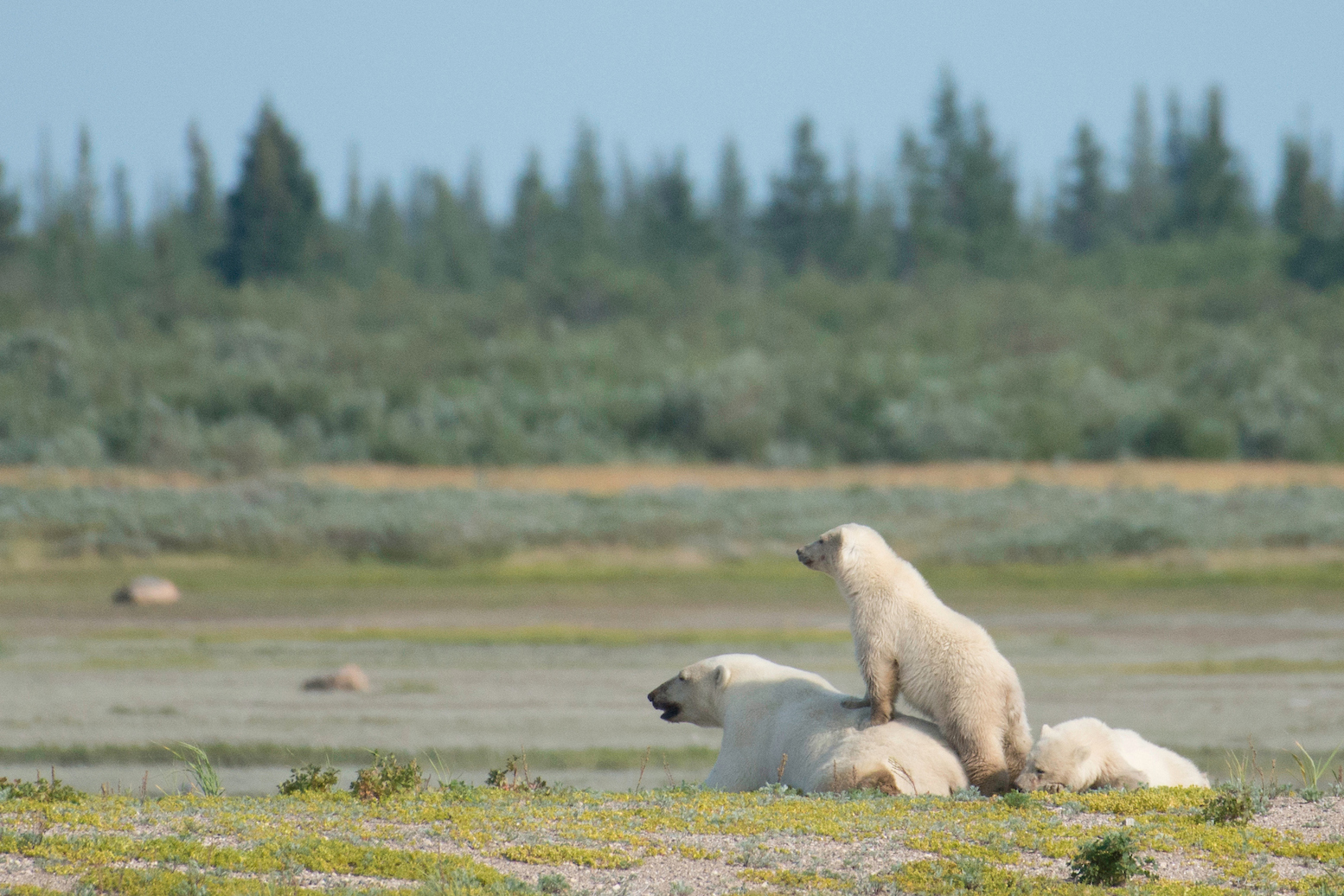 See Polar Bears in Summer, Fresh Off the Ice and Oh So Pretty

By Churchill WildAugust 26, 2021No Comments

When the bears come off the Hudson Bay ice when it melts in spring, where do they go until it freezes again in the fall, a period of some three to five months?

Wind and cold temperatures do not deter people from all over the world to visit northern Manitoba in October and November to observe the magnificent, white polar bears that gather to await freeze up — so they can head off for some long-awaited ringed seal feasting.

But the bears are also there in July and August, fresh off the ice, looking clean, white and oh so pretty. They are more spread out along the coastline because they “land” when the ice pans melt in late spring. Hudson Bay is not frozen over in one flat piece of drift ice. The entire bay is 762,000 square kms—bigger than Texas—of chilly green water.

Warm temperatures and winds from the north send vast ice floes, or pack ice, along with the bears, floating toward the southwest end of Hudson Bay. When the ice finally melts, the bears end up on the bay’s shore with fat stores to last them the summer. From wherever they land, the bears move inland and up and down 100s of kilometres of ocean coastline until fall when the ice near the coast freezes again.

Churchill Wild lodges are all situated near or along that coastline, meaning our lodges are one of the few vantage points to see polar bears in the summer. If you flew along Hudson Bay’s western coastline from Nunavut, north of Manitoba, hundreds of kilometres southward, past Wapusk National Park, beyond the mighty Nelson River, continuing past Cape Tatnam Wildlife Management Area all the way to the Ontario border, you’d spot dozens and dozens of bears all on or near the coastline. Most would be solitary or in small groups of two or three. You’d also fly over thousands of snow geese. But let’s focus on the bears.

Polar bears are the largest bear species and the biggest land carnivores in the world, though they are considered a marine mammal. Male polar bears can be more than three metres tall when standing on their hind legs, and weigh more than 450 kilograms.

Yet, their behaviours will delight you—as they roll on their backs in a willow bush, furry paws straight up in the air, or amaze you—as they amble past while you’re out on a walking excursion with one of our polar bear whisperers. Polar bear basks in the warmth of the Arctic summer sun

Spending time in any season in this ethereal landscape does something to the soul. August offers the possibility of seeing it in its summer glory—carpets of tiny tundra flowers, blue seas filled with snow-white belugas, and summer polar bear behaviour (even the bears love the tundra flowers in this great shot).

Planes for our lodges depart from Churchill or Gillam. Churchill is accessible by air or rail from Winnipeg or Thompson (the 1,600-km railway line was originally built over permafrost and muskeg in 1929 by a crew of 3,000).