Nanuk provides richly for those who care about her

Once upon a time, in a land far, far away, there were magical places where you could walk with polar bears. The Hudson Bay coast in Manitoba, Canada was one of those places, and it remains unchanged to this day. Polar bears still rule this wild kingdom, and it was they who allowed us to create Nanuk Polar Bear Lodge in their small piece of paradise, perhaps to get an important message out to the world.

“This is a special place, we live here, and we need you to take care of it.”

Nanuk Polar Bear Lodge is located directly on the coast of Hudson Bay, 250 kilometres southeast of Churchill, Manitoba. Solar powered and built with beautiful timber beams, its wings soak up the sun through large glass picture windows as you recline on the deck with a steaming cup of coffee and watch wolves dart in and out of the willows. A black bear and her cubs scurry by in search of a safe haven from predators. You hear the quiet snapping of twigs as a moose glides its massive frame through the underbrush. The sun dips low until gradually a new light finds the night, darkness falls, and the aurora borealis bursts from the heavens.

Nanuk Polar Bear Lodge is one of three Churchill Wild ecolodges offering polar bear walking safaris and a member of the National Geographic Unique Lodges of the World. The lodge is situated on the edge of the Kaskatamagan Wildlife Management Area and bordered by a natural coastal throughway used by polar bears, wolves, black bears, moose, caribou and other wildlife. The boreal forest forms the backyard at Nanuk Polar Bear Lodge, and when the polar bears are sleeping, or at least down the road a bit, more wild creatures emerge. 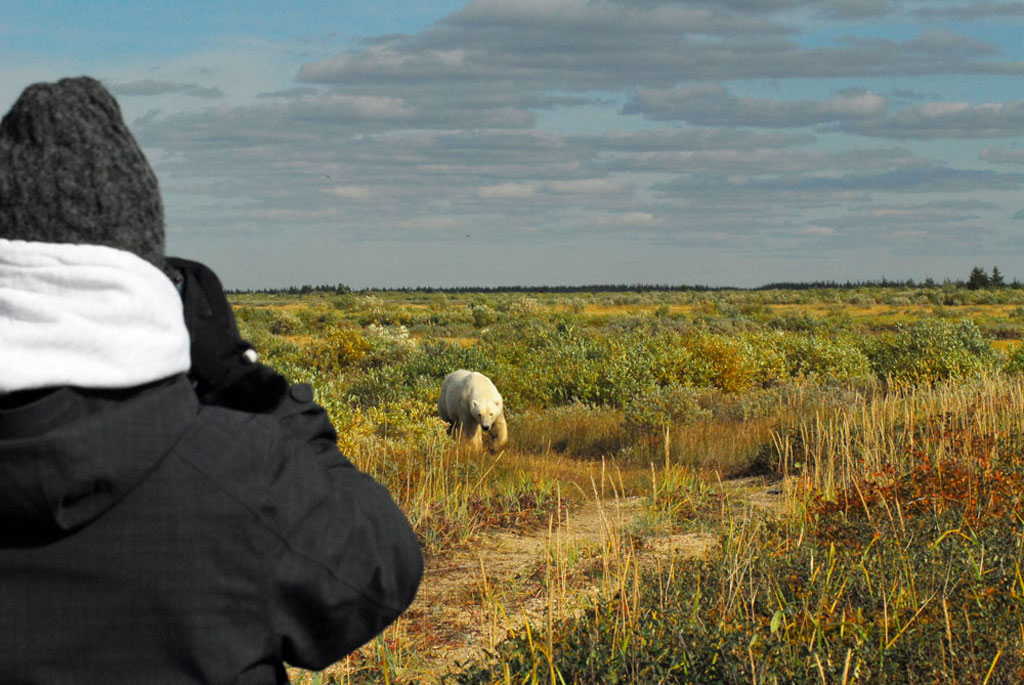 The Nanuk Polar Bear Lodge experience is unique due to its prime location along the forest’s edge. You ride in a tundra rhino across the Hudson Bay flats before getting out to walk with the polar bears. This isn’t to say the bears don’t come up to the lodge (because they do!), but with all the natural cover from the willows and trees, it can sometimes make them difficult to spot.

The tundra rhinos, which are kept to established pathways, esker ridges and self-repairing tidal flats, not only make polar bears easier to spot, they also allow guests to get closer to the bears that walk out to the flats to bask in the sun close to the water. This not only provides the bears with an option to cool off, but is also part of their protective instinct. When out on the flats, they can easily see another bear approaching from far away. If the approaching bear is deemed a threat, swimming provides an escape option. And hello baby polar bears at Nanuk! Because it is situated near prime polar bear denning areas, Nanuk Polar Bear Lodge has birthed our newest tour, the Den Emergence Quest. Launched in 2015, this is an intense tour, not for the faint of heart or for those who get cold easily. It takes place in March, and we endeavor to watch mother polar bears emerging from their dens for the first time with their newborn cubs. Winter is still very present at this time of year in the Arctic, and the mothers are eager to get the cubs walking confidently before making their way to the sea ice. This is a crucial time for polar bears and possibly one of the more intense child rearing displays in the animal kingdom.

There are only a few months left of winter, Mom hasn’t eaten in months and she needs to get out on the ice to start hunting seals, while simultaneously protecting her cubs from other polar bears or predators. It’s rare to see cubs at such a young age, and something I have yet to personally experience thanks to education and other travel commitments getting in my way. In 2018, guest on the Den Emergence Quest successfully sighted a mother and her two cubs making their way out to the sea ice. It was a precious moment that brought tears to the eyes of some of the guests, as they witnessed the adorable fortitude of baby polar bears. Mom and cubs at Nanuk on the Den Emergence Quest. Virginia Huang photo.

Nanuk Polar Bear Lodge’s large picture-windowed lounge offers panoramic views of the surrounding landscape, and you don’t actually have to go outside to see something special, but it does make a tremendous difference when you can step outside and immerse yourself in the wild.

Last year I got to fly into Nanuk twice, once to open up the lodge for everyone with my husband Jason, and again to train some of the new hospitality staff. It was a balm to my soul. Jason and I flew in to open up the lodge in late July, which requires starting up the generator, moving dry goods stored in freezers over the winter into the pantry, prepping the yard for incoming freight, taking rough inventory, and making sure no furry critters got in to enjoy the accommodations. On our one-hour flight from Churchill to the lodge, we saw about 60 polar bears lazing about. Polar bear emerges from the boreal forest at Nanuk.

Jason landed the caravan on the nice sand landing strip and it struck me that we were the only two people around. With the sun shining its warmth on us and no bugs around, I felt fortunate. The responsibility of being bear conscientious weighed on me, but the freedom in my spirit bloomed. Of course, nothing ever goes smoothly, I live under Murphy’s Law quite frequently.

We couldn’t get the power on, and without power, we couldn’t do a lot of our other tasks. Jason and I were engaged at the time, but I think this was one of our first marital disputes. He wanted to keep flicking switches until it worked and I, the more cautious one, wanted to call our Director of Lodge Operations, Nolan Booth, on the satellite phone for advice before touching anything on the expensive machinery. Nolan’s advice was to keep flicking the switches. It worked. We went on our merry way into the lodge, looking for the keys to start a quad. They were hidden in the deep dark abyss behind many doors, some requiring construction work to get through. The lodge becomes a mini Fort Knox when we leave, in an effort to prevent off-season polar bear parties. Thankfully, it’s been a while since we’ve had a polar bear break in, although we did have a grizzly bear break into Dymond Lake Ecolodge a few years back. He couldn’t find the key.

With keys in hand we could finally start up the machines and get moving. Okay, there were a few more hiccups involved, but we got it done with only one breather taken by yours truly on the viewing tower. There’s something about looking out across the flat expanse of Nanuk, jacketed by trees, that really calms the irritation in me. The fresh air helps too.

We unloaded the lumber from the caravan onto the tractor, all the while keeping a sharp eye out for one of the 60 polar bears we counted on the way in, and the resident wolf pack. With that completed, Jason started the tractor and it sunk straight into the sand. Our three-hour assignment turned into an all-day event, unloading the lumber and then digging out the tractor. I scrounged some juice boxes and trail mix that had been left over from winter for lunch. Victorious, we decided to head out on the trail and explore the wilderness of Nanuk without a soul around. We saw fresh moose tracks everywhere we went, sometimes wondering if they were just feet ahead of us in the brush. There were scours of polar bear tracks in the mud flats and we followed them down the coast. Alas, it was time to go home and surrender our freedom, but I knew I was coming back in a week and a half.

Upon my return, I was met with the familiar hum of excitement. Our first guests of the season were arriving in four days. Along with the other staff, we did a deep “spring” cleaning of the lodge, fluffed the pillows and set up the gift shop. The lounge was made ready for evenings of wine and fine dining over stories of adventure. Every morning I was distracted by the arrival of the wolf pack playing on the runway, or a mother black bear and her cubs sauntering by the windows, mere feet away. It was as if all the animals knew that the arrival of guests was imminent and it was dress rehearsal time.

I kept my camera on a side table for easy reach, creeping on to one of the decks for a photo whenever I could. One morning, at a fresh 5:30 a.m. I remember thinking how nice it would be to see the wolves in the rising mist as I was crossing the deck to my room. Movement caught my eye and there were four wolves right below the deck, skirting the edge of the lodge and then off into the willows. I stood completely still, itching for my camera but not wanting to miss the moment. That same day I got to watch black bear cubs trying to wrestle a tree before their mother called them off due to the arrival of a polar bear on the runway. In four days, Nanuk had made up for the grief it had caused me the week before, laying out all its beauty for me to see. Even while I was standing bear guard for the window washers, I found myself creeping through the tundra for photos of blooming flowers amidst the mossy ground, and finding jewels of wild strawberries nestled among them. Nanuk Polar Bear Lodge has some of the best strawberries I have ever tasted. You can pick a hundred of them and only have a handful, as they aren’t much bigger than blueberries, but the taste is sweet.

Nanuk provides richly, for those who care about her.