The rich wildlife of Hudson Bay

“Come walk with me, on the coast of Hudson Bay.” ~ Robert Postma photo.

Churchill Wild’s lodges are located in the heart of the Hudson Bay lowlands, which are part of a rich ecosystem teeming with wildlife. This area, where the boreal forest transitions to the Arctic tundra, is an active wildlife corridor that offers opportunities for some spectacular wildlife viewing.

In addition to polar bears, we see black bears, moose, caribou, wolves, fox, wolverines, marine mammals including beluga whales and seals, and a plethora of migratory and shorebirds. There’s nothing quite like waking up in the morning to see a polar bear meandering past the lodge! Dennis Fast photo.

Polar bears are marine mammals that would normally only come off the ice to den and have their cubs. The Hudson Bay ice melts in July however, and the bears are forced to come ashore. They prowl and sleep along the coast near our Lodges until the Bay freezes over again, when they venture back out on to the sea ice in search of their favourite food: seals. 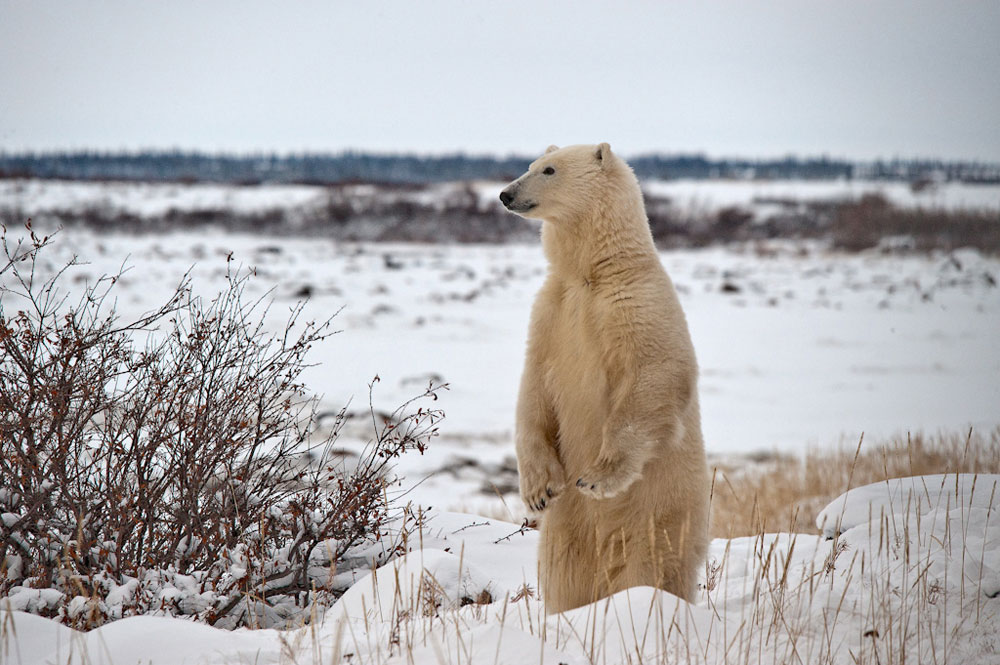 On the lookout at Dymond Lake Ecolodge. Dennis Fast photo.

Hudson Bay provides a habitat for the most accessible polar bear population in the world. Powerful and visually appealing, polar bears are the largest land carnivores on earth. Males regularly reach 1200 pounds, and measure up to 11 feet from nose to tail, while females can weigh in at as much as 700 pounds. Up close and personal on the Great Ice Bear Adventure. Dennis Fast photo.

While our guided tundra walks sometimes allow us to approach to within 50 metres of a polar bear, the fenced compounds at Churchill Wild’s lodges allow guests a chance to appreciate the enormity of these magnificent animals from just a few feet away. If you’re lucky, you’ll have the opportunity to look into their eyes and even smell their breath! The belugas will swim right up to you at Seal River, if you sing the right song. Build Films photo.

Almost as popular as the polar bears are the belugas whales, which congregate in river estuaries along Hudson Bay for their calving season in July and August. Belugas are relatively small, toothed whales that weigh between 1,100 and 3,300 pounds and measure, on average, about 15 feet in length, with males slightly larger than females. Their bodies are stout, with a very thick layer of fat which is essential for insulation from the cold water.

Belugas are the friendliest of whales by nature. This, coupled with their ability to turn and look at you, makes for the experience of a lifetime when you’re in the water with them. If you sing or hum into your snorkel mask, these curious white whales will swim to within an arms-length of you, and sometimes even closer. Don’t know what to sing? Songs by the Beatles and Abba have proven quite effective in the past! It is not uncommon for black bears to come right up to the fence at Nanuk Polar Bear Lodge. Jad Davenport photo.

It is estimated that more than 380,000 black bears reside in Canada and, contrary to popular perception, black bears are not true hibernators. Although their heart and respiratory rates drop while they are denning, they can be roused if disturbed. Also, if the weather becomes exceptionally warm during the winter months they may even wake up and wander around for brief periods of time.

Thanks to its location in the heart of the boreal forest, our Nanuk Polar Bear Lodge is a great place to view black bears as they forage for berries in anticipation of their denning period. Due to the limited amount of human activity in the area, the bears are very often spotted during daylight hours, and it’s not at all uncommon to see them circling the lodge, moving from one berry patch to another! Bull moose at Nanuk Polar Bear Lodge. He knows exactly where you are. Dennis Fast photo.

With their tremendous physical power and vitality, moose can travel over almost any terrain. Long legs carry them easily over fallen trees and their cloven hooves and dewclaws spread widely to provide support when they wade through soft muskeg or snow. When frightened, a moose may crash noisily through the underbrush, but full-grown antlered bulls can and do move silently through the willows and bush around the lodge.

Nanuk Polar Bear Lodge is at the center of the largest remote moose population remaining in western Canada. The many streams and rivers around the property make it an excellent spot for viewing moose. Exceptionally huge bull moose wander the coastline every fall and are easily wooed to within camera range when they’re distracted from their mission of finding a potential mate. Keep your ears open for the sounds of moose during the breeding season in September! The barren ground caribou is the very essence of the north country. This subspecies is well known for its large migration. Snow and the need for food dictate when the caribou will begin migrating. During the winter, bulls and cows stay in separate herds and calves stay with their mothers. All settle in the forest, which provides shelter and an abundance of lichens beneath the snow.

In the springtime, the caribou herds rejoin and venture across the tundra to the calving grounds. The cows separate from the herd during calving time, rejoining the bulls for the summer, when the tundra provides a rich source of plants and grasses to graze on. Mating occurs in the autumn, after which the caribou disperse for the winter. Wolves are intelligent creatures with highly organized social systems, and they contribute in very healthy ways to the balance that exists in the Arctic ecosystem. Wolves howl to communicate with distant members of their own pack (their family group); to announce their presence to neighboring packs; and sometimes it seems, just because the mood (or moon) strikes them.Pressure from people can make wolves very skittish, but where that pressure is minimal, as is the case at our lodges, the wolves become quite trusting and we’re able to see them almost as often as we hear them. Our remote wilderness locations provide us with some marvelous opportunities to see, hear, and even interact with these fascinating animals, one of nature’s most thrilling and elusive. There’s nothing quite like laying out on the tundra and watching the northern lights dance across the sky, as wolves howl in the distance.

Churchill Wild derives its expertise in delivering life-changing wildlife encounters from over 50 years of combined experience. This ensures you safe, exciting, on-the-ground encounters with polar bears and other residents of the Hudson Bay coastline. Should you decide to…

take a walk on the wild side. 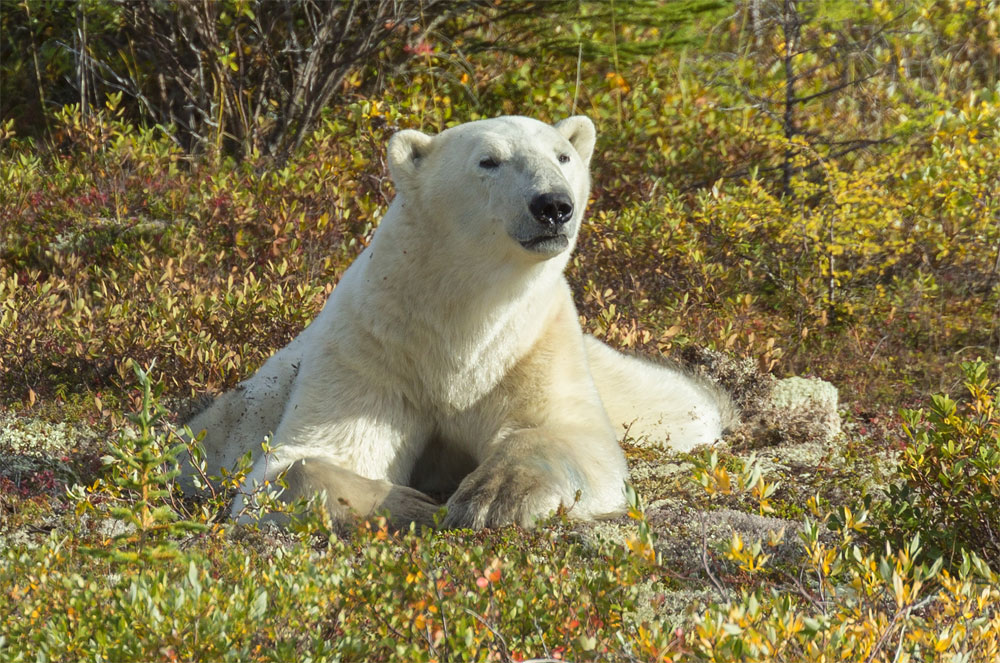 “Who is that over there?”~ Robert Postma photo.