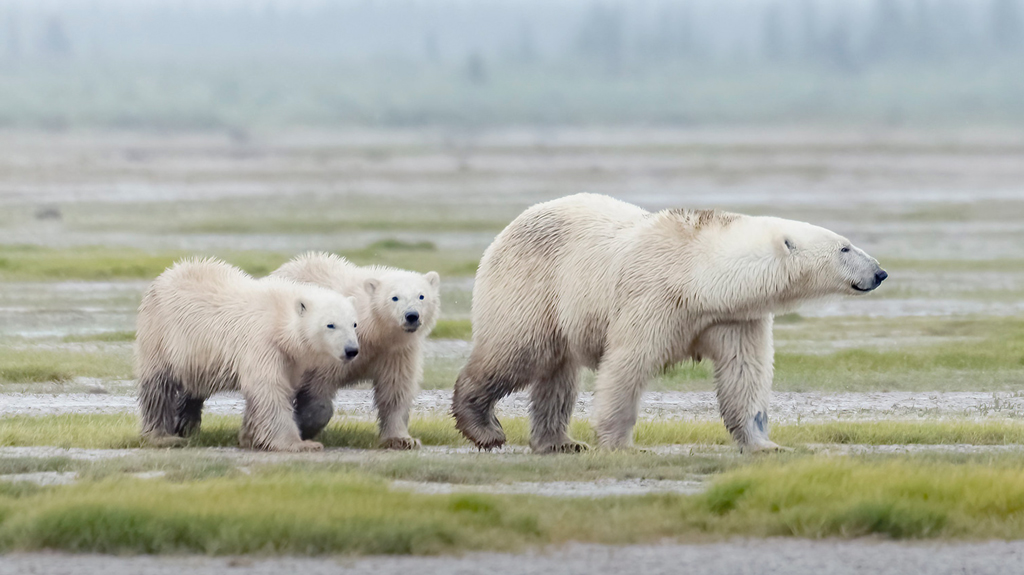 Guests take some fabulous photos on our summer polar bear safaris. Many are surprised by the fact that you can see polar bears without snow, and some, like An Xiao, even create beautiful online photo albums!

The almost-retired analyst from the Washington D. C. area was at Nanuk Polar Bear Lodge with six of her friends earlier this summer for the Arctic Discovery and she really captured the wild essence of Nanuk and its polar bears in her Churchill Wild Photo Album on Flickr.

An’s group went to Antarctica a year ago and they liked the wildness, so they decided they would travel to the Arctic. They were happy to discover that one of the guides and a lodge manager at Nanuk had also worked on the same ship, on a different trip to the Antarctic. That combined with research done by one of her friends, Allison Zhang, resulted in the group booking the Nanuk trip.

An Xiao (center, green jacket) and her friends at Nanuk Polar Bear Lodge.

“We travel a lot,” said An. “And we were thinking we should see polar bears. Last year we saw the puffins in Newfoundland and snowy owls in Alberta. Allison said there were quite a few programs out there to see polar bears, but that Churchill Wild was the one we should take. Allison does a lot of researching and writing about her trips. We sometimes provide her with photos. She writes in Chinese and it’s very popular in the Chinese community. She was the first one from our group to contact you and we totally trusted her.”

The Arctic Discovery includes time with the beluga whales in Churchill as well as a stay at Nanuk Polar Bear Lodge to see polar bears and other wildlife. Both were highlights for An. Curious baby beluga in Churchill! Photo courtesy of An Xiao.

“We thought you could only see polar bears in the winter,” said An. “But after the trip, we knew. We saw a lot of polar bears. We wanted to see belugas too, but we didn’t expect what we got. I’ve seen whales before but they were far away. The belugas we saw in Churchill were really close. And there were so many. It made you feel alive with all those animals around you.”

An and her husband travel quite a bit together, but she also travels with groups of friends, and it makes a difference.

“It’s very important to go on trips with people you get along with,” said An. “And we like to share our experiences. We have friends who have an interest in these kinds of trips, and I appreciate it when they tell me about their travels too, so we can go. You don’t want to go somewhere when you have no information.” There were 16 guests in total at Nanuk when An and her group were there, and everyone got along like old friends. They also enjoyed the food and the camaraderie.

“We were always eating,” said An. “And we really liked it, but sometimes we ate too much. Allison’s husband, Yandong, helped the chef prepare Chinese food one night. It was an authentic Chinese dinner. It was a mix of cultures and it was very enjoyable for everyone. There were 16 guests at the lodge when we were there and we all got along really well. The lodge, the whole experience, was very good. And we really liked the guides who led us to the polar bears.” An’s group helped prepare an authentic Chinese dinner at Nanuk! And it was delicious!

Seeing the animals in their natural environment was the most exciting part of the trip for An, and despite being on the ground with the polar bears, they were never uncomfortable at any point.

“The guides were very experienced and they told us how to walk towards the bears before we did our hiking,” said An. “It was a really natural way to see the bears. It was like watching National Geographic, where they point out that if you’re not scared of the animals, they won’t be scared of you. You maintain a comfortable distance. If I was by myself, of course I would have been scared, but with other people and the guides I wasn’t.” Polar bear family at Nanuk. Plus one! Photo courtesy of An Xiao.

“One time the guides saw a mom and cubs far from the lodge and they knew just where to go,” said An. “We took the ATVs out, then we hiked quietly in a line to a spot to wait, and the polar bears walked towards us and they got to really close. And there was another polar bear in the background. My friends really wanted to see that photo. That was the best experience we had. It was wonderful.”

Not only did An’s group see belugas and polar bears up close on their trip, they also met Nanuk’s black bears daily and enjoyed an evening of northern lights.

“A lot of black bears came to the fence at the lodge,” said An. “We called them permanent residents. And the northern lights were very impressive. We had always wanted to see them. We were so lucky. They were amazing. “ An said that a couple of people in the large group were thinking of going back to Nanuk on another trip, possibly during a different season, or maybe to Seal River, to see the polar bears in the fireweed from late July to early August. The fact that both Seal River Heritage Lodge and Nanuk Polar Bear Lodge are members of National Geographic Unique Lodges of the World would also be important information for anyone who travels to Churchill. “People are looking for National Geographic,” said An.

“Nanuk is a very special place.”