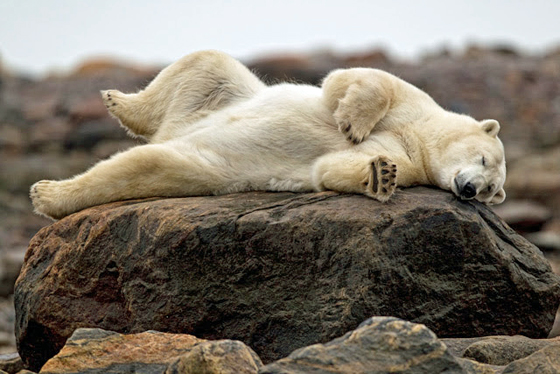 Had a great opening day with guests at Seal River Lodge! And the archaeologists were happy too!

Started with a zodiac trip to the river mouth, where we found loads of beluga whales as well as three bears bedded down on some tidal islands resting. One bear turned into two as a wee cub-of-the-year (COY) appeared at its mothers side peering at us as we slowly moved closer for a better view.

The large lone male bear lifted his head to watch us as well, eventually moving off into the boulders and then back again as we slowly moved away. He climbed onto a larger rock, posing beautifully in the sun for us before sprawling out to enjoy some quality down time.

We had to leave the polar bears so that we could go swim with whales while we had the chance, but we weren’t disappointed! With guests in the water and the sound of squeaks and squeals coming from their snorkels we all had a good laugh at their attempts to bring the white whales in a little closer. Swimming with beluga whales at Seal River. What’s she singing?

Everyone who went in had amazing encounters with these canaries of the sea and those of us who were viewing topside were treated to the whales’ curious antics and interactions from above.

Cocktails and dinner at the Lodge beckoned and as we made our way back we were pleasantly interrupted by the arrival of a massive white male polar bear wandering down from the north, visiting for a short while before continuing along on his way. Churchill Wild Guide Andy MacPherson and Vanessa Percival on their way back from beluga whale swim at Seal River Lodge.

The archaeologists from Oceans North Canada were here again last week and even though the weather prevented them from doing much of their work at Hubbard Point, they did manage to have a very successful dig at Eskimo Point, identifying 136 separate structures from pit houses to meat caches, and nearly 30 graves!

Dr. Virginia Petch of Northern Lights Heritage Services was disappointed early but by the end of the week was totally happy. From one hole that was only one meter by one meter by 40 cm deep the team removed 175 pieces of bones and stone tools. They were all very excited and I think will return next year for further investigation.

The archaeological survey is being conducted by Inuit Heritage Trust and The Pew Charitable Trusts Oceans North Canada as part of its research into the Hudson Bay ecosystem.