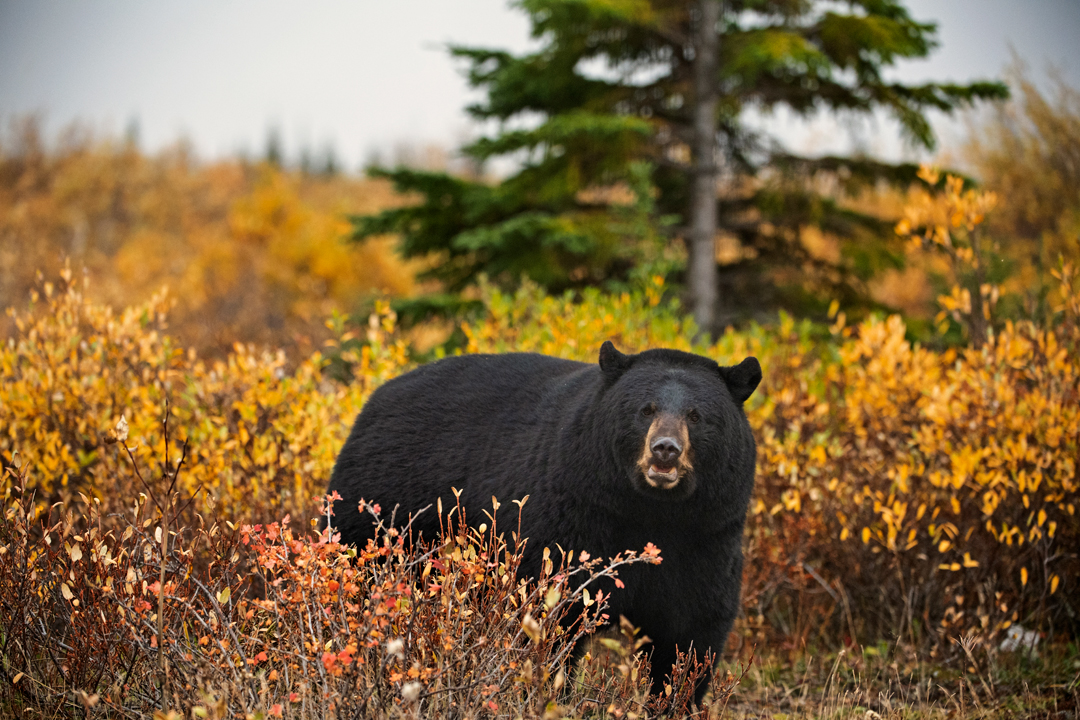 Black bear on the edge of the boreal forest at Nanuk. Anjali Singh photo.

Why is a conservation scientist launching a project to save the boreal forest that includes more intensive logging? The idea behind it is fascinating.

In Canada, one of the premier charities protecting our wildlife is the Canadian Wildlife Federation (CWF). Founded in 1962, the CWF is a non-profit organization that works to “conserve and inspire the conservation of Canada’s wildlife and habitats.”

Last year, on behalf of our guests, we donated to the CWF to help support a very exciting initiative related to the conservation of the North American boreal forest.

While it’s unrealistic to think that logging activities can be stopped, a group of scientists with the CWF believe logging can be done in a way that can provide greater protections for fish and wildlife. In 2010, the Canadian Boreal Forest Agreement was signed, and its premise was to suspend logging in certain areas in order to protect boreal caribou habitat. At the same time, the CWF was working on a parallel project to support the Agreement. They were trying to project which parts of the boreal forest in western Canada would most be affected by forestry, oil and gas, and agricultural expansion over a span of 50 years. With this information, they made recommendations to avoid future habitat loss. Ultimately, the two projects failed to get large areas of boreal forest set aside for caribou and other wildlife, but there’s still hope.

Dr. David Browne, the Director of Conservation Science at CWF, and his team are developing a project inspired by the practices of a Manitoba logging company that is going above and beyond by increasing the amount of protection they’re required to allow for — and forfeiting a bit of profit in the process.

When an area is zoned for logging, there are rules designating the amount of land between the logging area and nearby waterways and/or wildlife habitats that must be left untouched. These areas are known as buffer zones and, in Manitoba, the guidelines for buffer zones range from 30 to 200 metres. The company had logging rights near two separate protected areas, so they created a buffer zone more than a kilometre wide along a river that connected the two zones. The resulting corridor helps wildlife move undisturbed between larger areas of habitat and also better protects the river.

When this was brought to Browne’s attention, it got him thinking: can we do more of this? What if we created large wildlife corridors by greatly increasing the buffer around streams and river sections with important fish habitat for salmon, trout, sturgeon, and other fish?  This idea of using important fish habitat to guide the creation of large wildlife corridors is the premise of the new boreal forest initiative that Browne is exploring.

He notes that this model could lead to more intensive logging in some areas, depending on where the wildlife corridors are established. He also says that it’s unrealistic to think that the forestry industry could be shut down, which is why he’s working so hard on this new project. “It’s all about balance and working together,” he says.  “We need large protected areas but we also need working forestry landscapes that connect conservation areas.”

Browne attributes some of his inspiration to the ways in which Indigenous groups in the Northwest Territories, Manitoba and Ontario approach conservation of their lands while still supporting forestry. These groups did their own conservation plans and rather than focusing just on large protected areas, they designed “ribbons and networks of protection that are focused on the areas they value culturally.” Browne adds that many of these protected areas look like webs, built around significant waterways and the lands adjacent to them.

Working with Browne are Dr. Carolyn Callaghan, Senior Conservation Biologist of Terrestrial Wildlife at CWF, and wildlife biologist Nathan Clements. The team has already consulted with industry experts and compiled examples of where these types of protections have been put in place. They are now identifying additional areas in Canada where large buffers on rivers and streams can be used to benefit fish and wildlife.

Browne doesn’t have all the answers or plans yet, but says that Manitoba is one of the provinces they believe has a lot of potential. Moose on the edge of the boreal forest at Nanuk Polar Bear Lodge. Jad Davenport photo.

This of course is very exciting to us, as Manitoba’s boreal forest is home to one of our properties, Nanuk Polar Bear Lodge. Dubbed “one of the lungs of the planet,” the boreal forest is the largest intact forest in the world, with more than 1.2 billion acres of land untouched by industrial development.

The boreal forest is facing increasing pressure in the form of habitat loss for its wildlife. We would love to see stricter protections in place for the many species that call it their home, including wolves, moose, black bears, wolverine and songbirds.

Browne says that the proposed wildlife corridors will keep older age forest available to the birds, aiding in the work that the Boreal Songbird Initiative (BSI) is doing. The boreal forest is a massive breeding ground for the billions of songbirds that rely on it and the BSI is dedicated to education and outreach about its importance to birds, wildlife and the global environment. In addition to the home it provides for a menagerie of creatures, the pristine North American boreal forest plays a huge role in mitigating the effects of climate change. It stores the equivalent of more than 20 years worth of the world’s emissions from the burning of fossil fuels. It is also the guardian of the largest amount of unfrozen fresh water on Earth.

The Canadian government has committed to a 25% protection of terrestrial areas by 2025 and the CWF is trying to springboard off this concept with their boreal forest project.

One of the founding principles at Churchill Wild was our sustainable approach to wildlife and polar bear excursions, and to the overall operations of our three polar bear ecolodges. We’re proud to give back to an organization that cares as deeply for the land and its creatures as we do.