Mom with cubs at Nanuk. The other is hiding! Gillian Lloyd photo.

Photographer Gillian Lloyd and her husband Jools wanted to do something special to celebrate her 60th birthday, and in her own words, “by George did this adventure achieve that!!!” In the company of wolves. Gillian Lloyd photo.

Gillian and Jools joined six other travellers on the Den Emergence Quest in 2018 and she fondly described the memory of her trip to Nanuk Polar Bear Lodge on her Facebook page as an “incredible expedition” that was full of adventure, friendship, wolves, polar bears, foxes, moose, owls, and a rare wolverine. 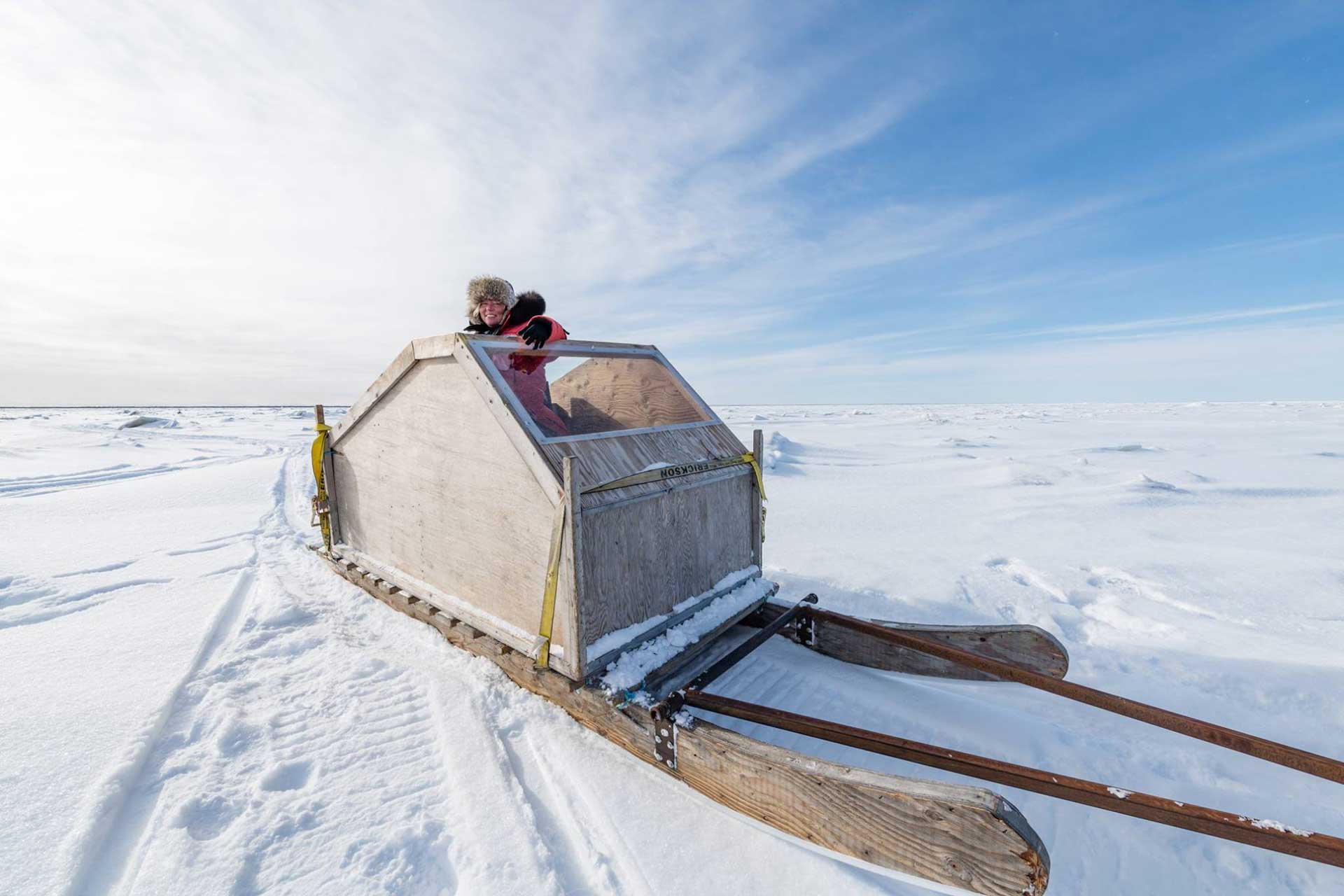 Gillian on the Hudson Bay sea ice at Nanuk. Ready to roll!

“We took eight plane journeys, travelled more than 500 miles over ice and snow in a wooden box (formally called a Komatik) and received a billion bumps,” said Gillian. “I got myself two black eyes (same eye twice), one strained thumb, two bruised arms and 10 frozen fingers and toes.”

And then the fun started. “We had fun helping to build fires, watching the building of an igloo and the creation of ice sculptures and enjoyed the improvisation of ice hockey with shovels and tape,” said Gillian. “And just by being a big kid again, sledding on our Komatik seat, and walking, falling and sinking deep into the snow.” Gillian and Jools on the move at Nanuk.

Even the cold couldn’t turn her smiles upside down.

“I enjoyed eating some of the best salads I’ve ever eaten, outdoors in minus temperatures!” said Gillian. “I also enjoyed the sunrises and sunsets, seeing so many footprints in the snow, and looking out over the sea ice knowing the next stop was the North Pole.” And with the wildlife came tears of joy.

“I cried seeing the mother polar bear and her cubs and witnessing them safely reaching the sea ice,” said Gillian. “I’ll forever remember celebrating being the first guests to have seen a polar bear emergence at Nanuk with delicious hot chocolate and wonderful Polar Bear Floats. And I’ll never forget the experience of being just a few feet from a wolf, watching and hearing two wolves howling to each other with us in between them. And the shout from Jools, ‘Wolverine!’” Gillian stored the whole trip in her heart, like memories in a music box, to be replayed as required, especially on her birthday. And just in case she missed something, Jools videotaped the whole adventure and posted it on Facebook here. “We had a million laughs, gained an Arctic family and found ourselves some amazing new friends,” said Gillian.

“We had the experience of a lifetime.”