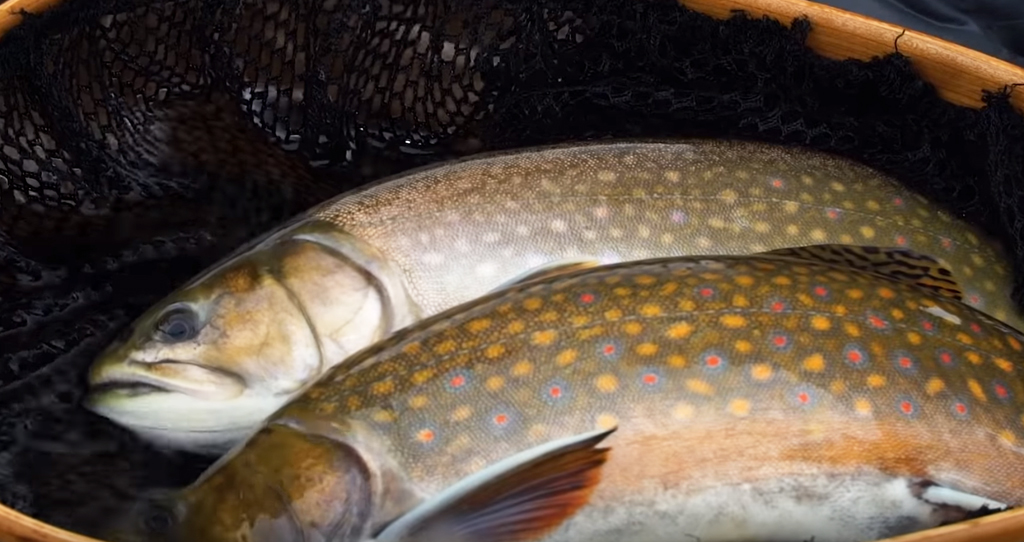 “The whole experience had the hair on my arms standing up the entire time,” said Mark Melnyk, producer of The New Fly Fisher TV Series for PBS and the World Fishing Network. “And I’m not overselling it.”

“You walk out there and you’ve got a guide with a gun on his back,” said Melnyk. “That sets the stage for you right away. You know that you’re in it. I mean, you’re really in it. The nugget for Nanuk is that it’s an exclusive fishery that doesn’t see any pressure throughout the year. It was top notch. One of the best lodge experiences I’ve ever had. I’ve been to a lot of lodges and Nanuk Polar Bear Lodge is right up there.” A television producer since 1996, Melnyk started out at TSN and moved within the Bell Media Family to CTV, Outdoor Life Network, Discovery Channel and Animal Planet. When he was laid off by one show, he’d be immediately picked up by another. In 2008 he ended up at the World Fishing Network.

“The World Fishing Network was the only television channel 100% dedicated to the sport of fishing when it started,” said Melnyk. “How To Tips, Locations, Travel, Documentaries, Industry Stories, Commercial Fishing, anything and everything to do with fishing.”

Melnyk started fishing with his grandfather when he was two years old. Now 44, the southern Ontario resident has created a career out of his passion.

“I’ve been fishing since I was able hold a fishing rod,” he said. “My grandfather and I were fishing buddies for 15 years until his passing, and he taught me everything he wanted me to know. After dinner every night at the lake we would go out trolling on Georgian Bay. We did really well. Back then the fishing was fantastic.”

One of Melnyk’s early assignments for the World Fishing Network was a trip to Minnesota with $10,000 and a directive to produce 10 fishing industry stories.

“That was in 2008, right at the time of the stock market crash.” said Melnyk. “The guy who hired me said ‘Let’s see if you have any of your Dad’s blood in you.’ Minnesota was the heartbeat and home of the FLW Bass Tournament, Ranger Boats, and a gentleman who had somewhat of a monopoly on all things fishing in the Midwest, Irwin Jacobs. I scored an interview with Jacobs about the status of fishing industry during a tough economic time.”

The Jacobs interview landed Melnyk his own TV series called Real Road Trip, where he would travel to different states and profile people, places, speakeasys, conservation and more.

“It wasn’t just about fishing,” said Melnyk. “It covered everything about the area we were in. The who, what, where, when and why of a specific state or province. It was a fun show. I got to fish with a lot of really influential people in the industry, and with many people who just had a pure passion for fishing. And for some unbelievable species, all throughout North America and the Caribbean. It was a great job.”

At one point, Melnyk’s boss told him he didn’t want to see him fishing anymore on his trips, but that didn’t go over too well.

“I was going to all these different places and doing fishing stories,” said Melnyk. “It was hard not to fish. There was no way I was going to go to all these places and not fish, so my boss said, ‘Okay, if you’re going to do that then jump in with both feet.’ We decided we were going to do a series called Real Jobs, which was about jobs in the fishing industry. Everything from crabbing in the North Atlantic to fishing as a tournament professional to working as a bait maker. I would profile those jobs and show what really went down in the fishing industry.”

Laid off after the Real Jobs series finished, Melnyk reconnected with Colin McKeown, the producer of The New Fly Fisher. He had met McEwen years earlier while working on Outdoor Life Network shows.

“We picked up his show on the Outdoor Life Network,” said Melnyk. “It was brand new and we became fast friends. I was responsible for the western lifestyle shows at the time, doing rodeo and bull riding events, producing the Calgary Stampede and PBR Bull Riding and a series called Half Mile of Hell about chuckwagon racing. When I got laid off Colin said he felt bad for me and asked me to host a couple of shows on The New Fly Fisher until I got another job. I’ve been there ever since.”

The New Fly Fisher’s primary broadcaster is PBS, which reaches a minimum of 88 million households across the USA.

“It’s been a fun ride,” said Melnyk. “I’ve fished for vampire fish in the Amazon, dodged grizzly bears while fishing for steelheads in British Columbia, caught caimans in Tobago and mako sharks in San Diego, all on the fly. I also caught a permit in the Bahamas on my very first cast. Some people never catch one of those in their entire life. It’s a saltwater flatfish that is really spooky.”

Melnyk recently returned from a trip fishing for Tarpon in Belize and a week ago he caught what may be a world-record walleye on the fly.

“It was 30.87 inches,” said Melnyk. “I caught it at Hawk Lake in Northern Ontario. The guy we were fishing with owns the only lodge on the lake (similar to Churchill Wild’s North Knife Lake Lodge on North Knife Lake). You can’t get to it without him.”

Melnyk will be a fly fisherman forever, he’s hooked now, but it’s about much more than just fishing.

“It’s an activity that you can do all your life,” he said. “It’s involved enough to take you away from your everyday problems but not so all encompassing that it takes over your life. When I step into a river, my shoulders drop. I relax. Nothing else in my life does that.”

Melnyk fishes with a core group of four that will be friends for life. There’s a common connection, a love of nature and the outdoors. “It doesn’t really matter if we catch anything,” said Melnyk. “That’s just a bonus. It’s the camaraderie. And the wildness of it all.”

Melnyk’s trip to Nanuk Polar Bear Lodge fits perfectly into the latter category, and he ranks it among the best fly-fishing experiences in the world. “Fishing for brook trout is something I’ve done a lot of,” said Melnyk. “I’ve opened programs in Northern Ontario for wild brook trout fisheries. With the exception of fishing for Arctic char up in Iqaluit, which also has polar bears, I’ve never had the adrenaline rush like the one I had at Nanuk. Simply because you’re immersed in pure wild.

“I’ve never before been in a position where I’ve had to fend wolves off with my fly rod, or had a moose emerge from the alders less than three feet from my face. And there’s nothing more anti-sensible than getting off a bike and walking towards a polar bear. You don’t walk towards polar bears, you walk away from them, but we walked towards them at Nanuk and got within 100 yards. That was exciting. Outside the lodge, on the deck, they were even closer. It’s a life-changing experience.”

Melnyk said there were only a few organizations he knew of off hand that offered fly-fishing trips similar to the quality of Wading Wild including Yellow Dog Fly-Fishing, Peter Widener and Fly Shop of the Bighorns, and Nervous Waters Fly Fishing.

“There’s a short window where sea-run brook trout do their thing at Nanuk and if you time it just right it’s lights out for brook trout,” said Melnyk. “It’s all based on the moon phase. We caught fish the first two days, but then the weather changed, the moon phase and the tides changed, and the fish just flooded in. I called it the “Tides of September” in the show. And the fishing really lit up.

“We were on fire and caught amazing numbers of brook trout, many in excess of 20 inches, sea-runs and residents, which is very important. We fished four different rivers using Olive Wooly Buggers, mice patterns, ant patterns and double bunny streamers.” Twenty-inch plus native and sea-run brook trout are common at Nanuk.

Melnyk was on the Wading Wild trip with videographer Jeremy Kennedy, who doesn’t fish. Their main guide was Kevin Brightnose, an aboriginal guide who started out as a guide for the Reimer/Webber family at North Knife Lake Lodge over a decade ago.

“One of things that we didn’t talk about, that’s important to me, is Nanuk’s commitment to the aboriginal locals,” said Melnyk. “That’s worth its weight in gold to me. My appreciation for everything Nanuk does went way up when I found out they hire local aboriginal guides and give back to the community.”

Melnyk also offered some advice on the type of fly-fishing gear needed for a trip like Wading Wild. He recommended a 6 weight 9-foot fly rod with matching floating line, a 3x leader and a medium arbor reel with a good drag system.

“I use an Orvis Helios 3D 6 weight fly rod with a Mirage III fly reel and 6 weight RIO Gold forward floating fly line,” he said. “Very good quality. The Orvis Encounter, 6-weight Fly Rod Kit is also an excellent entry-level setup, a fantastic kit for someone who wants to start fly fishing, but isn’t quite sure if they want to do it regularly. You’ll also need a variety of brook trout wet flies and dry flies.”

Melnyk is producing 26 fishing shows for The New Fly Fisher this year. A few of the places he’ll be traveling to are New York, Maine, Belize, Northern Ontario, Saskatchewan, Manitoba, Wyoming, Idaho, the Bahamas and Chile.

The best thing about The New Fly Fisher show? Besides fly-fishing education, instruction and entertainment?

“Well, Nanuk Polar Bear Lodge is on it,” said Melnyk.

Wading Wild takes place at Nanuk Polar Bear Lodge from September 20-26 in 2019, at the same time as our Wildlife & Wellness Safari. It just might make the perfect combination adventure for one or both of you! For more information on either safari, please call (204) 878-5090, email [email protected] or Contact Us here.