Nanuk Polar Bear Lodge, through the eyes of youth

(Note: Aoife was at Nanuk Polar Bear Lodge for the Hudson Bay Odyssey in August 2019 with her mom Catherine, dad Michael and brother Lochlann.)

The plane looked like something out of Indiana Jones: single propeller, capacity of 10. A blue stripe ran across the side. We began to chug our way up, up, up into the sky, the ground beneath us now farther and farther away until we could see marshes and lakes spread out for miles.

I peered out the window. Splashing and lumbering along a river was a massive bull moose with short, stubby antlers and a glistening brown coat. I squealed with joy as the pilot dipped us down for a better view and the moose stopped and looked curiously up at us.

Within an hour of landing at Nanuk Polar Bear Lodge we were on the ATVs. After a bumpy ride and a river-crossing, we were greeted with an abundance of strawberry bushes. The scarlet fruits were small, but they were ripe and delicious. We clambered through the mud, rain pouring down our faces, and plucked hundreds of tiny berries. My frozen hands clutched the strawberries as red juice dribbled down my hand in rivulets. I could hardly wait to sit by the raging fire in the lodge with a hot cocoa. Getting ready to glass for polar bears.

“Be quiet and stay in line,” ordered our guard Terry. The azure sky, dotted with ashen clouds, stretched above him as he leapt off the ATV. In the distance, was a lump of white he’d instantly recognized as a polar bear.

Awkward and clumsy in our red windbreakers and oversized boots, we began to form some variation of a line in the semi-liquid mud. Since I was at the back, I saw nothing but red jackets and pickleweed dotting the mud beside us. Stepping outside our perfect line would result in a severe reprimand not only from the guides, but also from my mother. Gasps began to arise from the adults around me who could see whatever was ahead. And then, everyone stopped and our line became amoeba-like. 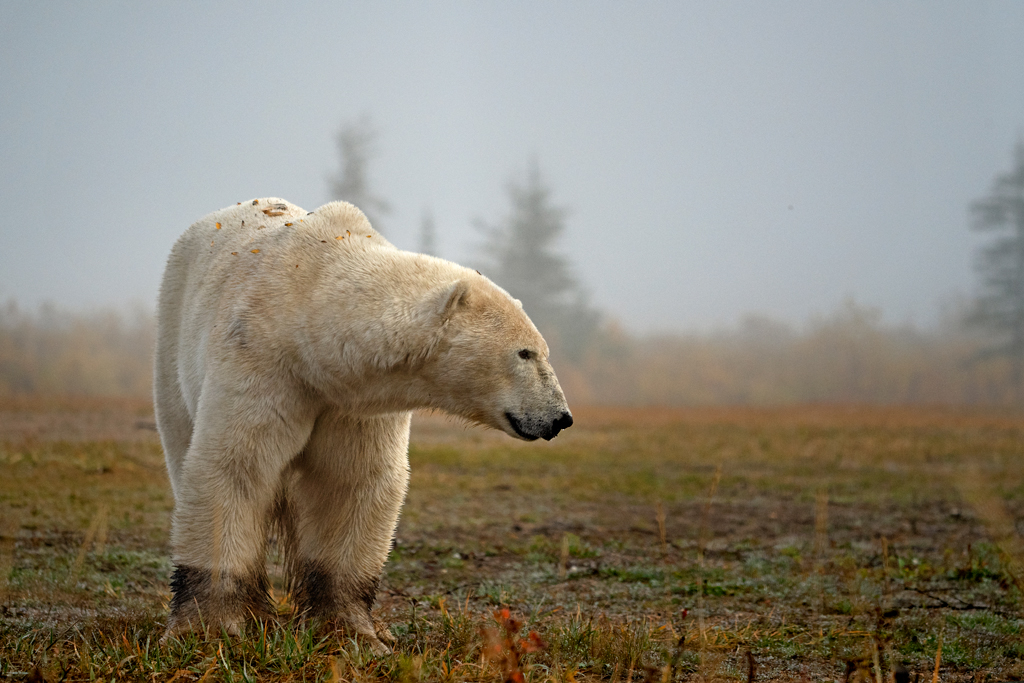 “He left a trail of paw prints behind him in the mud.” Anjali Singh photo.

“Can you see?” Mom’s whisper sent a shiver of excitement up my spine, and I made my way around to the outskirts of our crimson clump, and there, slowly shuffling his way towards us, was a polar bear the size of a car. His shaggy white coat was stained with mud and dripping with sea water, his massive paws bigger than my head. He left a trail of pawprints behind him in the mud, a trail that wound its way through the puddles. Nothing stood in the bear’s path. He tramped through the puddles without a care in the world.

The bear came closer and the guides walked toward him and began to raise their voices.

But the bear continued toward us, and Terry and Emri began to toss rocks toward him. I was ushered to the middle of the group with my younger brother, protected by men and women gripping cameras and binoculars. I managed to find a hole in between two adults and stared at the bear as he leisurely continued to approach us.

The guides had told us what would happen if a bear got too close and ignored the shouts and rocks: a flare. And so I watched as Terry pulled something from his belt. Everyone gasped, although strictly told not to. With a thunderous BANG! the bear stopped, only slightly startled, very slowly turned in the other direction, and began to walk away. We stood in awe, listening to the voices of the tundra: the calls of the sandhill cranes, the whistling wind, the faint sound of the surf, and I thought…

This is what the world was like hundreds of years ago.