From India to Canada, from tigers to polar bears, conservation and luxury know no bounds

by Vanessa Desorcy with photos courtesy of Anjali Singh

Whether it’s for tigers, polar bears, gorillas or elephants, wildlife lovers will travel across the world for the chance to come face-to-face with the world’s most enchanting — and sometimes elusive — creatures.

This is how we met Anjali Singh, co-founder and owner of SUJÁN. Her love for wildlife first brought her to us in 2017 on a tour with Ian Johnson Safaris. As we learned more about Anjali and SUJÁN during her second trip this past fall, we realized there are number of similarities between the way she and her husband Jaisal run their company, and the way Mike and Jeanne Reimer do things at Churchill Wild,

Both SUJÁN and Churchill Wild are family-owned and operated; at the heart of operations are a passion for wildlife, transformative experiences, and a steadfast commitment to sustainability and responsibility; and both have a distinct culture of personalized service and a familial atmosphere.

In the same way that Mike and Jeanne grew up among the wildlife of Hudson Bay, Jaisal grew up surrounded by tigers and leopards. His parents founded a film company and together produced Jungles of Rajasthan, which was the one of the first documentaries by an Indian film company to record India’s wildlife on camera. 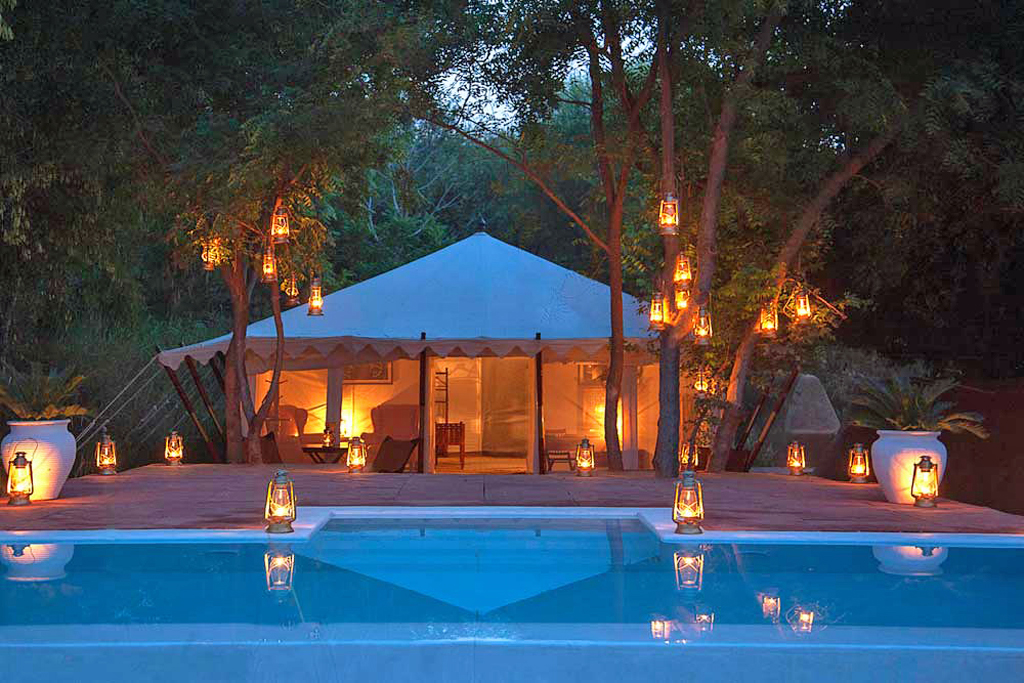 Jaisal’s first exposure to tigers came when he was eight weeks old and travelled to Ranthambhore National Park with his parents. His passion for wildlife grew as he did, living and learning about the residents of Ranthambhore’s forests under the shade of an ancient Banyan tree.

Having spent his childhood in the jungle, it was only natural that Jaisal commit his life to wildlife and conservation. In 2000, he built SUJÁN Sher Bagh, the first of SUJÁN’s tent camps. It was pitched within the family’s private farm on the periphery of what is now the Ranthambhore Tiger Reserve. Within a year, SUJÁN Sher Bagh was listed among the top hotels in the world. A few years later, Jaisal and Anjali met at a mutual friend’s wedding and they’ve been growing SUJÁN ever since.

Their award-winning safari company is based in New Delhi, India and now owns three luxury tent camps for viewing tigers, leopards and other wildlife, including the aforementioned SUJÁN Sher Bagh, SUJÁN The Serai, a desert lodge, and SUJÁN Jawai, a leopard-viewing property. They also manage SUJÁN Rajmahal Palace, a luxury hotel. Additionally, the couple helped redesign — and oversee operations of — Elephant Pepper Camp in Kenya.

While we at Churchill Wild experience extreme cold during our off-season, SUJÁN’s properties are located in Rajasthan, a region that gets very hot summers and then months of monsoon rains, necessitating the closure of their camps between May and September. Their tented camps are packed up every year to give the ground and the area time to breathe. This also allows Anjali and Jaisal to make design tweaks over the summer to optimize their experiences and minimize impact. The experiences offered at SUJÁN’s camps span history and culture, wellness, wildlife and adventure, and festivals. What makes them so distinct from other safari camps is the fact that their camps are surrounded by historic ruins and forts, UNESCO sites, tribal villages and temples. They provide a fully immersive experience — culturally, architecturally, and with the natural world.

At SUJÁN Sher Bagh, guests can venture into Ranthambhore National Park to view tigers, wild boar, antelope, monkeys, sloth bears and more. The SUJÁN The Serai camp, located near the ancient fortress city of Jaisalmer, offers camel safaris, desert drives and sundowners on the sand dunes. SUJÁN Jawai, in the heart of untrammeled wilderness, sits among a landscape of towering granite formations, caves, and winding sand riverbeds and is ideal for leopard viewing.

At Elephant Pepper Camp, in the Masai Mara, guests can participate in game drives and walking safaris to see lions, elephants, birdlife and more. And for those who seek the pinnacle of luxury, there’s SUJÁN Rajmahal Palace in Jaipur. Here, guests can revel in spa treatments, enjoy a private tour of the city palace, and dine at one of the four on-site restaurants.

SUJÁN’s safari and hospitality experiences allow them to develop and support projects to protect land and existing wildlife populations and support local communities. This is at the forefront of their operations and they’re leading the way when it comes to conservation and humanitarian initiatives. The four core areas they focus on are biodiversity, holistic community development, sustainability, and preservation of culture and heritage.

Each guest hosted at one of SUJÁN’s camps pays a small conservation levy, which is then invested into the community. Anjali and Jaisal are directly involved in the disbursement of these funds, meeting with company members and reviewing all opportunities to see where the need is greatest.

In addition to their passion for wildlife, the Singhs are deeply committed to providing social services and investing in local economies. They have an exemplary record of hiring local, and currently about 90% of their employees come from local communities.

As a means to give back to the local communities where they operate, a key focus area for SUJÁN is on education. They have adopted several local primary schools in the neighbouring villages to where they operate. Through the school adoption programme, they run initiatives such as teacher training, supplementing mid-day meal schemes, provide infrastructural support to school buildings through repair and construction and providing better tools for learning such as books and computers. One of SUJÁN’s many community development projects.

Aided by their guest conservation contributions during the last season, SUJÁN have also been able to provide free primary healthcare to five neighbouring villages at SUJÁN Jawai. They have donated a fully equipped medical van that travels to communities six days a week, staffed and stocked with free medicines for the local communities. The unit has treated 5,982 patients since October 2018. Fifty percent of these patients are women. Villagers no longer have to travel long distances to seek basic medical help either, which has traditionally been custom in India — SUJÁN delivers medicines to their door.

SUJÁN’s commitment to conservation is two-fold: they not only provide support and hands-on assistance to government agencies and NGOs, they also work tirelessly to create awareness for wildlife, the environment and the need to preserve habitats. From providing vehicles to their local forestry department, to digging wells in order to provide water for new Park areas, their efforts continue even when their Camps close during monsoon season.

Prolific afforestation, the use of low-impact construction such as mud walls and grass banks, and careful use of fuel are just a few of the ways SUJÁN reduces their carbon footprint. Their farms preserve strains of indigenous poultry and cattle, and provide homegrown produce tended by local farmers.

Some families pass down heirlooms, some pass down folk stories, and some pass down a commitment to preservation, protection, and enhancement of local habitats and wildlife.

In the same way that Mike and Jeanne Reimer raised their family at our polar bear lodges, Anjali and Jaisal Singh are raising their seven-year-old twins among the wildlife of India and Kenya, instilling in them a love and respect for the natural world, and ensuring the world will be a better and more beautiful place…

For generations to come.

Anjali and Jaisal Singh with their twins. The future.