By Churchill WildOctober 25, 2022No Comments Elite photographers Jad Davenport, Charles Glatzer and Robert Postma have been leading Polar Bear Safaris and wildlife photography trips at Churchill Wild for over 10 years, and we’re delighted to have them back again in 2022!

All three of the Churchill Wild polar bear lodges are in full swing right now, with the Polar Bear Photo Safari at Nanuk running from Oct. 9 to Nov. 18, followed by the Cloud Wolves of the Kaska Coast citizen science safari, which is also hosted at Nanuk Polar Bear Lodge.

Davenport, who doubles as the Director of Wolf Programs at Churchill Wild, will lead two departures of the Cloud Wolves of the Kaska Coast safaris from No. 16 to Dec. 2 and two more from March 13 to March 29 in 2023. Davenport has led four departures of the Cloud Wolves of the Kaska Coast safari to date, and each departure has had excellent encounters with wolves. While polar bears are not expected on our wolf safaris, they do appear on occasion, and guests have seen them interacting with wolves at Nanuk Polar Bear Lodge.

Will it be polar bears AND wolves this year? You’ll have to be there to find out. Limited spots still available for late 2022. Enquire here. 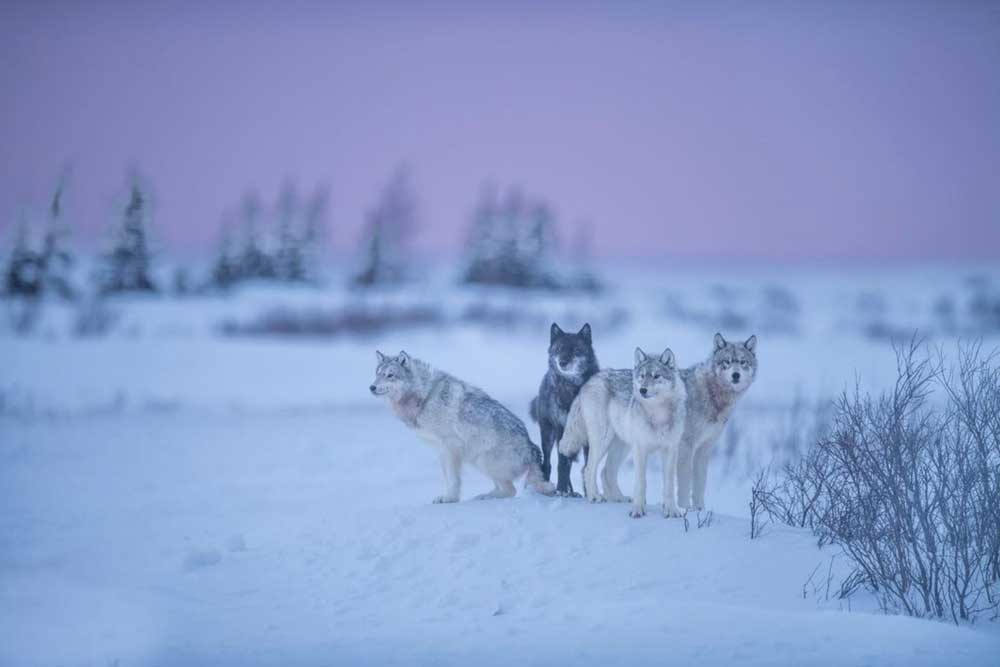 An award-winning National Geographic photojournalist, Jad can teach you how to capture your once-in-a-lifetime Arctic adventures, whether shooting with your iPhone or the latest Nikon DSLRs.

Jad began his 30-year career in photojournalism as a documentary photographer, developing his talent for visual storytelling while covering more than a dozen wars. He’s worked in over 160 countries in some of the wildest places on earth. As a photographer with National Geographic and a photo instructor and naturalist with National Geographic/Lindblad Expeditions, Jad’s knack for capturing the essence of an experience has defined his career.

A master storyteller and winner of four Lowell Thomas Awards – the most prestigious honour in the field of travel journalism – Jad’s stories have appeared in many of the world’s most respected publications including LIFE, National Geographic, Travel + Leisure, Condé Nast Traveler and ISLANDS magazines.

Jad can offer real-time tips and advice to fit the ever-changing wildlife and weather conditions, and work with you one-on-one to help you focus on your own photographic interests. His teaching style is relaxed and focuses less on the technical aspects and more on the visual elements that create a powerful image to tell a story.

Jad focuses on finding colour and catching moments, and on how to achieve new perspectives through simple and surprising field techniques. He can also help you understand and appreciate the beauty of many different light situations so that you will always be able to take exceptional photos.

And of course, Jad loves Arctic adventure, and that’s an understatement for what you’ll discover on the safaris he leads, which currently include the Cloud Wolves of the Kaska Coast and the Arctic Safari. “Chas” is a Canon Explorer of Light, a prestigious group comprised of the most influential photographers and cinematographers in the world.

Recognized as one of the top nature and wildlife photographers on the planet, Chas has received over 40 prestigious awards for superior photographic competence demonstrated through photographic competition, advanced education, and service to the profession.

Make sure to read Chas’s cold weather photography tips and what to wear ideas before your Polar Bear Photo Safari at Seal River or Nanuk! Robert’s love affair with photography began at a very early age. He has traveled the world, honing his skills in Iceland, Bolivia and throughout North America, but he considers the Churchill Wild’s polar bear lodges and the Hudson Bay coast to be among his favorite destinations for photography. Robert’s photos have been published in calendars, books, travel guides and magazines and have won numerous awards.

Robert travels the globe in the hopes of finding and capturing the indescribable moments that nature gives us, so that he can share them through his art. To him, there is nothing better than standing in front of an approaching storm, being enveloped in a blanket of northern lights or photographing polar bears in a blizzard! He’s experienced that wondrous trifecta more than once on the Churchill Wild polar bear safaris, and has also met our famous semi-resident polar bear Scarbrow on numerous occasions on the Great Ice Bear safari at Dymond Lake Ecolodge.

Well acquainted with the unique wildlife, weather and landscapes at the Churchill Wild lodges, Robert’s decades of knowledge and experience make him an invaluable addition to any group. His relaxed, friendly teaching style will put you at ease and give you the confidence to go after those once-in-a-lifetime photo opportunities.