Churchill Wild is proud to announce that our co-founder Mike Reimer was the recipient of the prestigious PURE Life Experiences Award for Contribution to Experiential Travel at the PURE Awards ceremony hosted at Sofitel Marrakech in Morocco on September 12, 2017.

The award for Contribution to Experiential Travel recognizes an individual whose efforts have directly influenced the development of the experiential travel movement – a true maverick whose commitment, curiosity and daring sets new standards for the industry at large. Churchill Wild was also shortlisted for the 2017 PURE Life Experiences Award for Transformational Travel.

“We’re very proud to receive the 2017 PURE Award for Contribution to Experiential Travel,” said Reimer. “And we’re thankful to PURE Life Experiences. We would also like to congratulate our fellow nominees, Mei Zhang and Charles McDiarmid. “We’ve worked incredibly hard for this and it truly has been a team effort. All I seem to do these days is get out of the way and watch the team at work. It’s the contributions from everyone that have the world calling at our door these days. Of course, behind every man with a harebrained scheme stands a stronger woman (Jeanne) holding it all together. And let’s not forget Jeanne’s parents, Doug and Helen Webber. They were tireless supporters when the ship was first setting sail. We have a lot of people to thank for this, especially our guests.”

The 57-year-old Reimer co-founded Churchill Wild with his wife Jeanne in 1993, after purchasing an abandoned whale research station on the remote coast of Hudson Bay. Reimer knew that polar bears walked up and down the coastline after the ice melted on the Bay, and with his background working as a wilderness guide for Doug Webber, he thought he could bring polar bears to the world, on foot. The pioneers of the world’s first and only polar bear walking safaris had only one paying guest in 1993, but they persevered in developing their unique brand of polar bear tourism while also raising four children, all of whom played an integral role in the development of the family-owned lodges. Twenty-four years later, Churchill Wild now employs up to 50 team members and owns and operates three luxury polar bear lodges on the Hudson Bay coast: Seal River Heritage Lodge, Nanuk Polar Bear Lodge and Dymond Lake Ecolodge. Both Seal River Heritage Lodge and Nanuk Polar Bear Lodge are members of National Geographic Unique Lodges of the World, and Churchill Wild now hosts up to 700 guests per year including world-renowned photographers and filmmakers, all of whom fly in to walk with polar bears, take ground-level wildlife photographs and enjoy delicious meals derived from the Blueberries and Polar Bears cookbook series co-authored by Jeanne Reimer’s mother Helen Webber and Marie Woolsey.

Churchill Wild now offers 11 different Arctic safaris and polar bear tours that also feature Arctic glamping on the Barren Lands, snorkeling with beluga whales and a variety of wildlife viewing that may include not only polar bears, but also wolves, black bears, caribou, moose, Arctic fox and more. 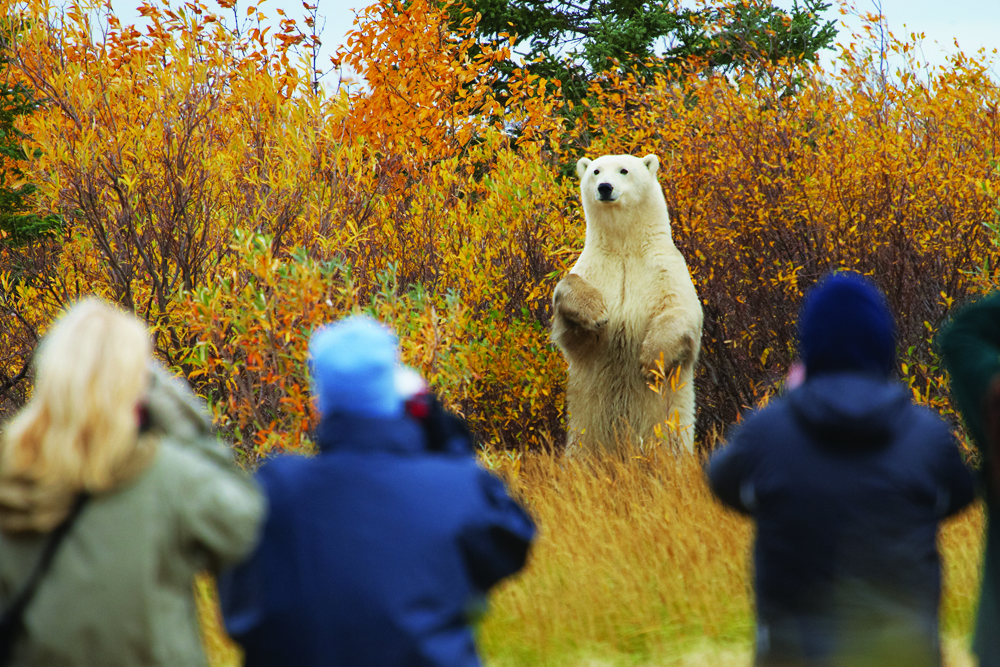 Exceptional bear guiding and outdoorsmanship skills gained from 50 years of practical experience, combined with excellent customer service and culinary delights courtesy of Jeanne’s family — who have almost 100 years of award-winning experience in the northern Manitoba tourism industry — have resulted in a delicious recipe for success in one of the most remote and pristine environments on the planet.