Winter at Nanuk Polar Bear Lodge is heralded by frosty mornings and ptarmigan and snowy owl sightings. Ptarmigan become snowy white and begin gathering to form winter flocks that can number in the hundreds. Although they are the only bird species to change plumage for winter, they have three seasonal plumages for the year, unlike other bird species with two. Related to grouse, one of their common names is ‘snow grouse.’ They exist in northern regions around the globe and mountainous areas where elevation creates a tree line. Their winter diet is predominantly willow and dwarf birch. This ptarmigan was our first sighting in November, having donned its white winter feathers. 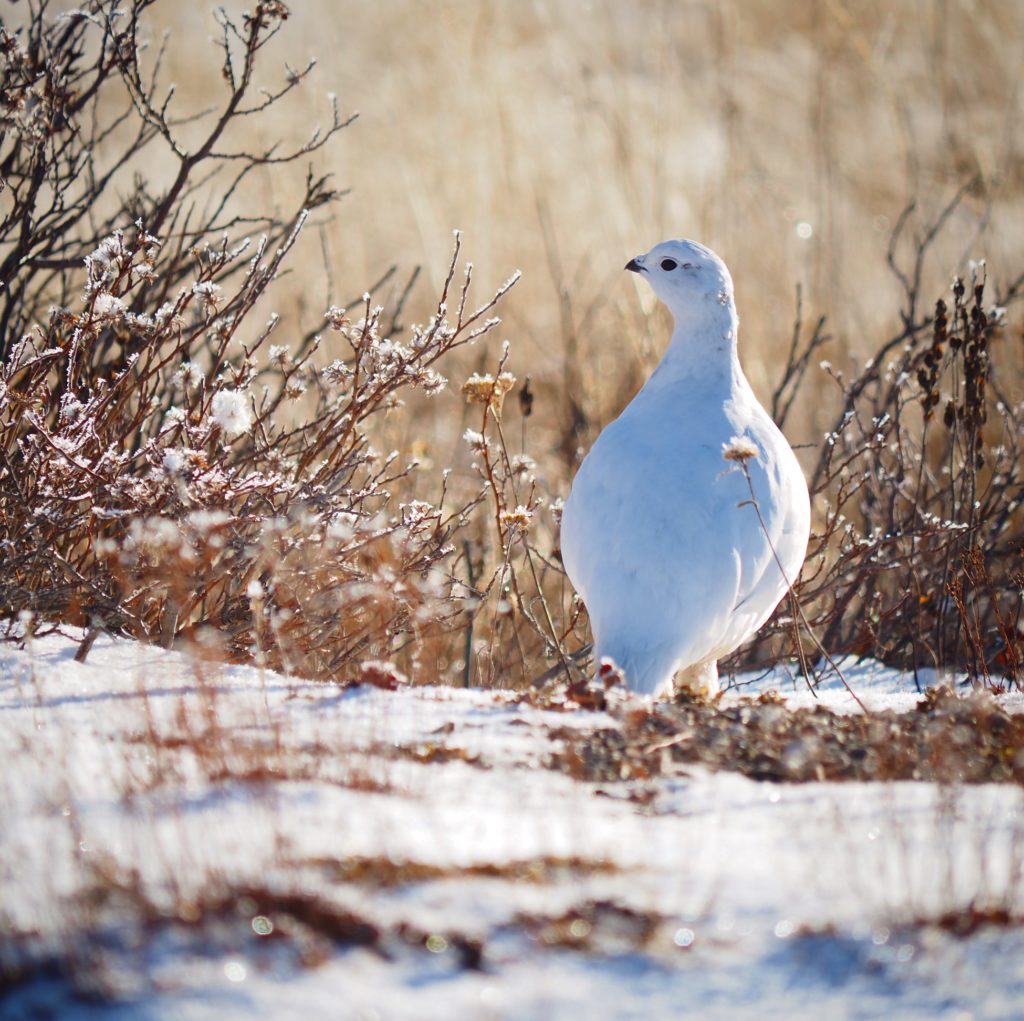 Snowy owls begin to be seen late fall as it snows. We see them out on the tidal flats, mainly using the sand ridges for hunting perches, where they practice the hunting technique known as the ‘still hunt.’ A snowy will sometimes sit for hours in one spot and relies on its sight for hunting overhearing, unlike some other owl species. They use their beautiful golden eyes to spot prey up to 1.6 km away and then rise silently. Their wings are silent in flight. The leading edge of a snowy owl wing has serrations that help cut the air, creating more negligible turbulence. This air is further broken as it travels over the wing, hitting the trailing edge of flexible feathers. Lastly, the wings and legs of the bird also have downy feathers that are specialized in absorbing sound. Altogether these three traits make them relatively undetectable in flight. What do snowy owls hunt? There are over 200 recorded prey species, but I’ve seen a few that aren’t on that list, such as skunk. They will eat anything they can hunt and even follow polar bears to scavenge off their kills. This time of year at Nanuk, we see them hunting the flocks of snow buntings, ptarmigan and lemmings.

Females and juveniles have dark banding, and males are paler, turning entirely white as they age. So far this year, we have only seen females perched on the beach ridges and driftwood hunting.

Since winter has begun, we have been seeing grouse around the lodge. The one pictured here is a sharptail, but we also see spruce grouse at Nanuk Polar Bear Lodge. Sharptail or ‘fire’ grouse forage primarily on the ground, eating berries, insects and seeds. However, they also fly into the white spruce trees and feed on the needles, making up the majority of their winter diet. There are plenty of opportunities to view a variety of arctic birds all year round, especially at our lodges on one of the amazing tours. Make sure to watch closely.