A nap in the flowers. Sharon Hirsch.

It’s International Polar Bear Day, and we’re celebrating by sharing some of our favourite polar bear photos. We chose these images based on the reactions they elicited the first time we saw them — ‘oohs’, ‘ahhs’, ‘awws!’ and ‘wows’. They’re photos that have unique lighting, composition or capture something very rare. Take a look and let us know in the comments which image is your favourite!

People from around the globe will be celebrating International Polar Bear Day by reducing their impact on the environment, while also creating awareness about the impact of climate change, especially where it concerns polar bears.

Organized by Polar Bears International, it’s a day when people are asked to reduce their carbon output by doing things such as turning their thermostats down, driving less, using more energy-efficient devices, and simply being kinder to the environment through reducing, reusing and recycling, which is something we’ve been practicing at our Arctic ecolodges for over 30 years.

Please be kind to the planet, for so many reasons, including the beautiful creatures you see below.

1. No list would be complete without one of Dennis Fast’s famous fireweed photos. We call this one “Fireweed Frolic” for good reason! 2. This is one of the very first den emergence photos to come out of our safari by the same name. Chosen for its obvious “awwww!” factor. 3. There is something satisfyingly clean about this bear. A polar bear’s fur is often muddy or covered with berry stains, but this guy (or gal) is oh-so-pristine. 4. Oh Scarbrow! This bear has been visiting Dymond Lake Ecolodge for the last 10 years or so. He’s a guest favourite and loves to pose for photos. Scarbow on the move at Dymond Lake Ecolodge. Jianguo Xie.

5. There’s nothing quite like the sun rising over Hudson Bay, partially shrouded by the mist coming off the water. We love this photo so much we made it the cover for our 25th anniversary book! 6. You can almost hear a gentle summer breeze moving through the tall grass that this bear is lounging in while the warm Arctic summer sun washes over him. No wonder he looks so relaxed. 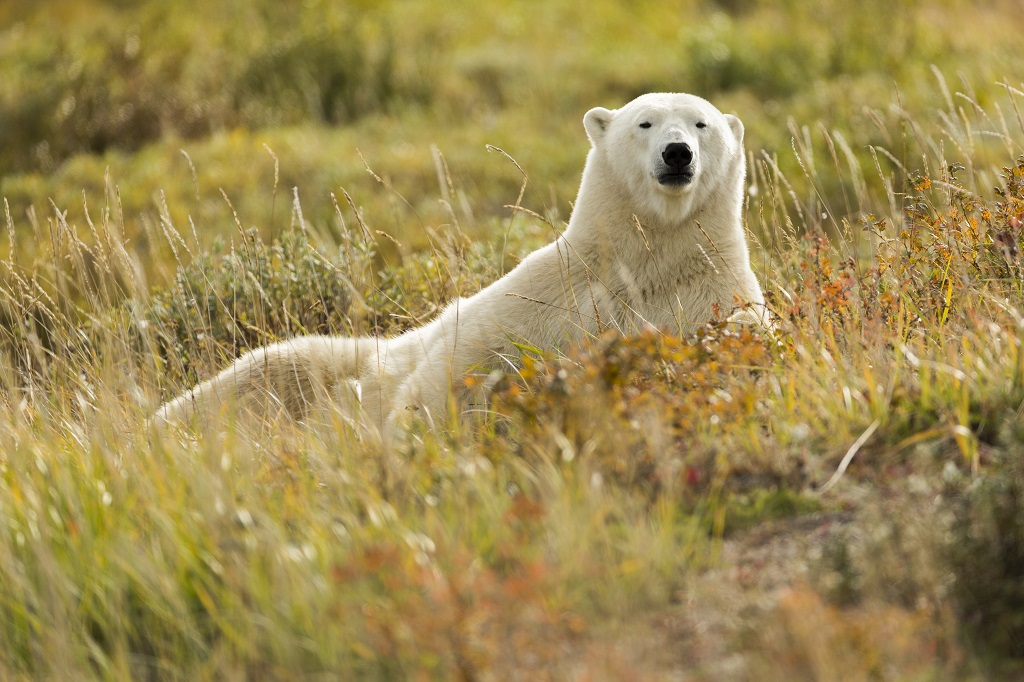 7. This photo was submitted by @thelementofnature on Instagram to our 2017 guest photo contest and ended up winning first place in the polar bear category. It’s not every day you catch a polar bear making a phone call. 8. Bears don’t normally spar in the summertime, so this is a rare sight, for a couple of reasons! Number one, they have a lot of fat to keep them insulated during the winter months, so any kind of exercise will make them very warm. Secondly, because they don’t eat much while on land, they typically avoid expending a lot of energy. 9. Sparring in late fall is a much more common occurrence, but every bit as spectacular. 10. This bear should be wearing a crown, don’t you think? “Regal” is the word that came to mind the first time we saw this photo. Does it get any more regal than this? Sheree Jensen. A walk in the late afternoon sun at Nanuk. Jad Davenport.

12. We call this ‘Monday mood’. Calmly and quietly, easing into the week. 13. We love the way this photo was composed, almost as if Christopher was giving them a bit of space for their sweet moment. Tender moment on the rocks at Seal River. Christopher Scully.

14. These colours! That bear! This definitely isn’t a scene we see every day. 15. Another one of the cutest moments we’ve seen captured, this mom and cub sure make a statement against the beautiful fall foliage at Nanuk Polar Bear Lodge. 16. Polar bears have a lot of personality, and this one is no exception. We’re not sure what this bear is doing, but it sure made us chuckle when we first saw the photo. 17.  Does anyone have questions about why we chose to include this photo? 18. There’s so much wisdom and maturity in the eyes of this bear that make this one of the best portraits we’ve ever seen. 19. Yes, this photo is similar to #5, but equally amazing! That magical time when winter is just settling in at Seal River Heritage Lodge, and the bears are still around, makes for beautiful images. 20. Last, but certainly not least, we call this ‘Portrait of a Lady’. A photographer who can make you think the words “graceful” and “ethereal” really knows what she’s doing. Portrait of a Lady. Ruth Elwell-Steck.